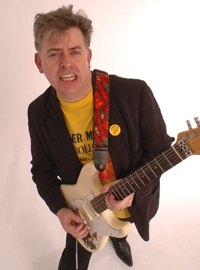 Founder of The Academy of Rock

Peter Cook leads The Academy of Rock, a creativity and innovation management consultancy, blending leading edge ideas from the world’s business schools with the power of music, be it rock, jazz or classical. He has delivered conference keynotes and longer masterclasses to some of the world’s ...

Peter Cook leads The Academy of Rock, a creativity and innovation management consultancy, blending leading edge ideas from the world’s business schools with the power of music, be it rock, jazz or classical. He has delivered conference keynotes and longer masterclasses to some of the world’s top businesses and organisations.

Peter has over 25 years experience, comprising:

• Trouble-shooting businesses and starting up factories around the world

• Writing and performing music in a variety of disguises

Peter holds an MBA (which, in his view should stand for Much Bigger Amps rather than More Bloomin’ Analysis), is a Chartered Chemist, Chartered Marketer and fellow of the Chartered Institute of Personnel and Development. An NLP master practitioner and wildly enthusiastic guitarist. He brings this combination of theory and experience together in events and conferences that reach way beyond the keynote speaker fare.

Peter is ‘Rock’n’Roll Innovation Editor’ for a US based Global Innovation Company called Innovation Excellence, run by Julie Anixter, who has worked with Tom Peters and Seth Godin amongst other leading business thinkers around the world. The company is the most popular innovation website in the world. As part of his role there, Peter has been asked to write articles and interview rock stars and gamechangers in business.

Peter is also an accomplished rock, pop and jazz musician, having performed with John Otway, Wilco Johnson, Lorraine Crosby who sang on Meatloaf’s No 1 hit ‘I’d Do Anything For Love’, Bernie Torme and Altered Images. He has performed at the Edinburgh Fringe Festival and helped Bill Nelson, leader of 70’s pop art band Be-Bop Deluxe and who turned down David Bowie for a job as a guitarist, to sell out a concert for the ITV Legend’s series.

He also famously sponsored an entrepreneurial adventure to go on a record breaking round the world rock’n’roll tour with cult punk rocker John Otway. The tour was an unmitigated disaster in the great British ‘Carry on’ tradition. The story of this comedy of errors has very powerful lessons for entrepreneurs and people trying to start new ventures. It is the equivalent of the real ‘Spinal Tap’ tour.

Peter is often accompanied by his colleague John Howitt, an international session musician who has performed with Celine Dion, Anastasia and Shirley Bassey. He also works with a number of music celebrities.

• Riffs and myths of Leadership

• The head, heart and soul of business

• Blowin’ away the blues – a motivation masterclass

In practice Peter adjusts his conference inputs to a particular client need.

Peter has been a Governor for a Primary School and a College. He was Council Board member of the Chartered Institute of Personnel and Development. It’s only Rock’n’Roll, but Peter thinks you will like it…