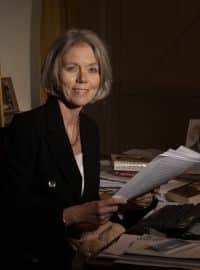 Penny as a successful author is perhaps best known for her Royal writing and broadcasting but the monarchy is not her only field of expertise She is an accomplished biographer. He most recent...

Penny as a successful author is perhaps best known for her Royal writing and broadcasting but the monarchy is not her only field of expertise She is an accomplished biographer. He most recent collaborations have been with ‘Patti Boyd’ and ‘Sir Cliff Richard’ she has spent almost as long writing and broadcasting about consumer affairs and travel. Her TV work includes programmes about health, families and lifestyle. An experienced ‘Live’ presenter. Her TV credits include the BBC2 ‘Travel Show’ and the consumer programme, ‘4 What It’s Worth’, Ch4, ‘The Afternoon Show’, BBC 1. She has recently researched and presented two series for BBC Radio Scotland, covering such diverse subjects as ‘Famous News editors’ facing a personal crisis and following the children of famous parents. Experienced Public Speaker.

Penny is best known for her royal writing and broadcasting. She has been writing well-respected, best-selling biographies for over 20 years and is much in demand as a commentator on royal events – most recently at the royal Wedding in April – but the monarchy is not her only field of expertise. She spent almost as long writing and broadcasting about Consumer Affairs and Travel and before spent many years interviewing and profile-writing in the national press. She also presented programmes about health, families and lifestyle and edited a book about women’s health. And running parallel to the writing and broadcasting for five years (1993 -98), she was a director of the John Lewis Partnership, responsible for the journalism and public relations within the department store and Waitrose supermarket chain.

She has a wealth of experience in presenting live and recorded programmes, both in the studio and on location. She presented the highly successful Travel Show on BBC2 for nine years (1998-97) and for seven years was the presenter of an award –winning consumer programme, 4 What Its Worth on Channel 4 (1982-89). She was also an investigative reporter on that programme, involved in foot-in-the-door confrontations. And she co-presented, with the singer Barbara Dickson, two series of The Afternoon Show on BBC1 (1984-85). She has also presented corporate videos.

As a journalist she has written for most national newspapers and had regular consumer columns in Private Eye and Business Traveller magazine, a current affairs column in Today newspaper, and regular interview slots in the London Evening News and Evening Standard. Penny is an experienced corporate presenter and a highly informed after-dinner speaker.

She is the author of best-selling biographies of both the Prince and Princess of Wales and two British Prime Ministers- Margaret Thatcher and John major. In 2002 she wrote Home Truths: Life around My Father, and her latest book, The Firm, The Troubled Life of the House of Windsor, was published in April 2005.

She is a committed vegetarian, a Samaritan volunteer and patron of Women’s Health Concern and Cirencester Eating Disorders Association. Other interests include motorcycles (she was an RAC/ACU instructor), cars, cooking, dogs, cats, children and chickens. She is married to James Leith, has four children and lives in Wiltshire.