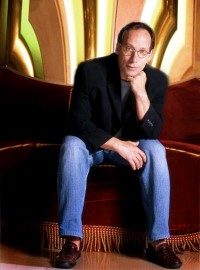 The Physics of Star Trek

Prof. Lawrence M. Krauss is Ambrose Swasey Professor of Physics, Professor of Astronomy, and Director of the Center for Education and Research at Case Western Reserve University. He is an internationally known theoretical physicist with wide research interests, including the interface between ...

Prof. Lawrence M. Krauss is Ambrose Swasey Professor of Physics, Professor of Astronomy, and Director of the Center for Education and Research at Case Western Reserve University. He is an internationally known theoretical physicist with wide research interests, including the interface between elementary particle physics and cosmology, where his studies include the early universe, the nature of dark matter, general relativity and neutrino astrophysics.

Prof. Krauss is the author of over 200 scientific publications, as well as numerous popular articles on physics and astronomy. In addition, he is the author of six popular books, including the international bestseller, The Physics of Star Trek, and the award winning Atom: An Odyssey from the Big Bang to Life on Earth...and Beyond.

He has lectured to popular audiences at such places as the Smithsonian Air and Space Museum, the National Museum of Natural History, and the Museum of Natural History in New York, as well as serving on the boards of three different science and natural history museums, and appears frequently on radio and television around the world. Prof. Krauss is the recipient of numerous awards for his research, writing, and lecturing. These include the Gravity Research Foundation First Prize Award (1984), and the Presidential Investigator Award (1986). In February 2000, in Washington D.C., Prof. Krauss was awarded the American Association for the Advancement of Science's 1999-2000 Award for the Public Understanding of Science and Technology.

In April 2001, he received the Julius Edgar Lilienfeld Prize of the American Physical Society. The citation reads "For outstanding contributions to the understanding of the early universe, and extraordinary achievement in communicating the essence of physical science to the general public". In April 2001 the American Institute of Physics announced that Krauss had been awarded the 2001 Andrew Gemant Award, given annually to "a person who has made significant contributions to the cultural, artistic, or humanistic dimensions of physics". In 2002 Krauss was awarded the American Institute of Physics Science Writing Award, for his book, "Atom". In June of 2003 he was awarded an honorary D.Sc. degree from Carleton University for his scientific contributions and his efforts to improve public understanding of science.

In August of 2003 Krauss was awarded the Oersted Medal, the highest award of the American Association of Physics Teachers, for his contributions to the teaching of physics. Krauss is the only physicist to have been awarded these three most prestigious awards by the APS, AIP and AAPT. More recently, in 2005, the American Physical Society awarded Krauss the Joseph P. Burton Forum Award for his work on Science and Society.

He has been particularly active leading the effort by scientists to defend the teaching of science in public schools. His essay in the New York Times on Evolution and Intelligent Design in May 2005 helped spur the recent controversy that has involved the Catholic Church.

Krauss is also one of the few prominent scientists today to have actively crossed the chasm between science and popular culture. For example, besides his radio and television work, Krauss has performed solo with the Cleveland Orchestra, narrating Gustav Holst's The Planets at the Blossom Music Center in the most highly attended concert at that venue, and was nominated for a Grammy award for his liner notes for a Telarc CD of music from Star Trek.

The Physics of Star Trek