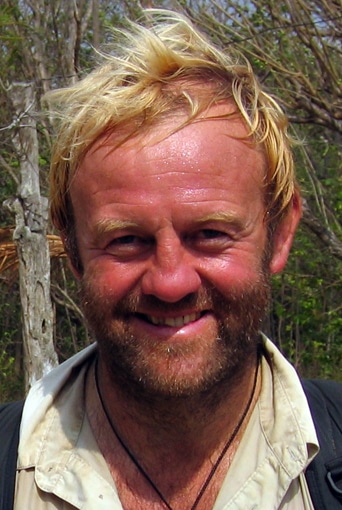 Ken Hames, is the former SAS Major whose Herculean tasks have included leading a dozen women through the rainforests of Borneo in Ch4's 'Jungle Janes', guiding expeditions of physically disabled teenagers in Beyond Boundaries and building the first ever eco lodge and game reserve in Kenya in BBC 1 ...

Ken Hames, is the former SAS Major whose Herculean tasks have included leading a dozen women through the rainforests of Borneo in Ch4's 'Jungle Janes', guiding expeditions of physically disabled teenagers in Beyond Boundaries and building the first ever eco lodge and game reserve in Kenya in BBC 1 Mission Africa. Ken started his personal odyssey as a 16-year old army recruit leaving some two decades later as a major. He uniquely served as a Marine, a Paratrooper and Special Air Services. His military experience includes eight tours of Northern Ireland, The Falklands, the first Gulf War and a stint as commander of Britain's antiterrorist team. He's also represented Great Britain in cross country skiing, played rugby for the Combined Services and is a keen amateur opera singer!

He credits the military for his understanding of leadership. "Coming through the ranks, I know what it's like to be led," he explains. "The army is all about people. There's a clear hierarchy but individuals are continually required to step up to the mark, take actions and make decisions. It's an environment that demands initiative and risk-taking." His first TV series was The Trek, (1994) which gained media attention not least as its greatest supporter was Princess Diana. Ken took 12 disadvantaged youngsters, many habitual offenders, to the heart of Africa on a 500-mile journey over desert and mountainous terrain. Diana described Hames as "the master practitioner in the field of training and development".

Since then, he has created and fronted thought provoking series for the BBC, ITV, Channel 4, Five, CBBC, Sky , Discovery Channel and American TV.

The unlocking of potential in the most unlikely of people links his soldiering, documentary-making and now his work in Business Development "It's all about understanding how people work, what makes them tick," he says," and then helping them to surprise themselves." Certainly Airbus, Allianz Insurance, Greene King, the Metropolitan Police and the Department of Transport have all repeatedly used Ken. "They recognise that most organisational problems stem from people – their attitudes, behaviours and relationships," Hames says. "And so do all successes. If you get the foundations right, the rest will follow, and much quicker."

1.   Lead, Follow, Change or get out of the way - The road to authenticity
2.   Self awareness and self leadership - the 'hard yards'
3.   Beyond Boundaries - Unlocking talent- -people will surprise you
4.   'Let's do the twist again' - Emotional Intelligence - Developing your own credo
5.   The Passionate Business - encouraging your heart in the business arena