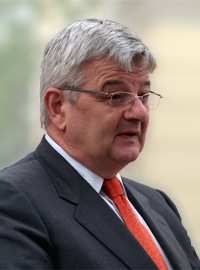 Joschka Fischer was born in Gerabronn in Baden-Württemberg, Germany on April 12, 1948, the third child of a German family, which had for many generations settled in Hungary. His family was expelled from Hungary after the Soviet occupation in 1946.Fischer entered politics in 1968 at the height of ...

Joschka Fischer was born in Gerabronn in Baden-Württemberg, Germany on April 12, 1948, the third child of a German family, which had for many generations settled in Hungary. His family was expelled from Hungary after the Soviet occupation in 1946.

Fischer entered politics in 1968 at the height of the German student movement. In 1982 he joined the newly-formed Green party. One year later he was elected to the first Green Party Fraction to serve in the federal German parliament, the Bundestag. Soon thereafter he became one of the leading figureheads of the German Green movement. In December 1985 he was sworn in as the first ever Green Party Minister in the federal state of Hesse where he held the portfolios of the Environment and Energy. From 1987 to 1991, Fischer was Head of the Green Party Parliamentary Fraction in the State Legislature of Hesse and from 1991 to 1994 he served a second tenure as Hessian Minister of the Environment and Energy and held the additional portfolios of Federal Affairs and Deputy Minister President.

Following the re-election of the Green Party to the German Bundestag in 1994, Joschka Fischer became co-chairman of the Greens’ federal parliamentary fraction. During his years as an opposition leader, he leveraged his party’s growing public acceptance into political success, and moved the Green Party to the centre of German politics, paving the way for participation in the nation’s federal government.

In September 1998, the Social Democrats, led by Gerhard Schröder, were able to form a coalition government with the Green Party ending sixteen years of Christian Democratic rule. Joschka Fischer became Minister of Foreign Affairs and Vice-Chancellor of Germany.

Fischer’s tenure as Foreign Minister was an eventful one which featured Germany’s first post WW2 active military mission in the Kosovo War. As a result of the devastating terrorist attacks in New York City and Washington D.C. on September 11, 2001, German troops joined the NATO intervention into Afghanistan. Joschka Fischer’s tenure was also characterised by his Government’s critical stance on the war in Iraq. In March 2003, Fischer, a strong supporter of EU consolidation, along with the Foreign Ministers of France and the UK led the EU3 negotiations with Iran on its nuclear program – a top priority on the European foreign policy agenda.

Joschka Fischer serves on the Board of the International Crisis Group and on the Executive Board of the European Council on Foreign Relations.