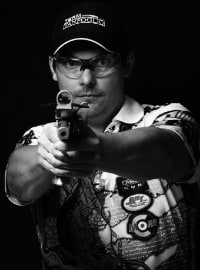 Eric Grauffel, is known for having an unprecedented winning streak. The 33-year-old native of France has won 200+ President Medals and is five times World Champion of the International Practical Shooting Confederation (IPSC). For his competitive shooting, Eric uses only the best material. "If your ...

Eric Grauffel, is known for having an unprecedented winning streak. The 33-year-old native of France has won 200+ President Medals and is five times World Champion of the International Practical Shooting Confederation (IPSC). For his competitive shooting, Eric uses only the best material. "If your equipment is not perfect, it is like killing yourself in competition," said Eric. Since 1995 Eric estimates he shot 3 million rounds.

During his run of an estimated 190 straight victories against the top shooters in the world, Eric has amassed fifteen French National Championships, four U.S. Championship including a back to back nationals in 2012, five European championship titles and five World Championship Titles. As an international competitor, Eric has represented France in the last five International Practical Shooting Confederation (IPSC) World Shoots and returned home each time with medals. He will again represent the nation in Rhodes, Greece at the 2011 World Shoot.

Born and raised in Quimper, France (on the west coast), Eric still resides there when he is not traveling the world competing. He began shooting with an air gun at the age of eight. At age 10 he shot his first pistol and within a year Eric was competing. He won his first French National Championship at age 15 and his first world title at 18. Eric dedicates as many as three hours a dayfive days a week in preparation for his sport. Each day he goes through a regiment of shooting and physical training. "This sport is basically technique, to be as skilled as possible you need to be like a thinking-robot,"

In practical shooting, competitors are required to take shots from all different positions, locations and angles. Shots often come on the move or at moving targets. Because all shooters are highly skilled, any edge one of the top competitors can get through physical training is very important. In addition to several practice sessions, Eric also spends several hours reloading each day. Grauffel says reloading his own ammo is much more cost-efficient and many competitors do this because it allows them to personally control everything about their ammunition.

1.   Motivation and inspiration
2.   Setting goals and how to achieve them
3.   How to prepare for the best performance possible