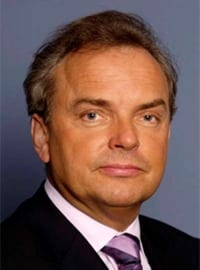 Steven Richard Antonius van Eijck was born on 4 August 1959 in Rotterdam.EducationAfter attaining his Atheneum-B diploma, he went on to study economics, specialising in fiscal economics, at Erasmus University Rotterdam (graduating in 1988). In 1991 he returned to the same university to embark on a ...

After attaining his Atheneum-B diploma, he went on to study economics, specialising in fiscal economics, at Erasmus University Rotterdam (graduating in 1988). In 1991 he returned to the same university to embark on a postgraduate course in European fiscal studies. On 8 March 2005, he obtained a doctorate under the supervision of Prof. L.G.M. Stevens with the thesis 'Het vermogen te dragen' ('The ability to bear').

Steven van Eijck set up his first enterprise, IBRON (Institute for Branch Research), whilst still a student. This was followed later by Adfident and TAPA BV, a consultancy and insurance firm in the medical sector. Between 1996 and 2002 he was chair of the board of the Academy for Financial Planning (AFP) and held the same position with the European Financial Planning Association (EFPA). He was also director/(major) shareholder of the 'Instituut voor Fiscale Kennisoverdracht BV' (IFK) in Rotterdam (also from 2003 onwards).

On 22 July 2002, he was appointed Secretary of State for Finance in the Balkenende I Cabinet. He went on to be appointed commissioner for youth policy in the Balkenende II Cabinet and was given ultimate responsibility for Operation Youth. This interdepartmental partnership (Ministries of the Interior & Kingdom Relations, Health, Welfare & Sport, Education, Culture & Science, Justice, Social Affairs & Employment, Housing, Spatial Planning & the Environment and Finance) championed a strong, result-driven youth policy. Following on from this, Steven van Eijck presented four advisory documents in 2006/2007 ('Koersen op het kind', 'Kompas voor het nieuwe kabinet', 'Diversiteit in het jeugdbeleid' and 'Groeistuipen in het speciaal onderwijs') containing 127 recommendations.

The majority of the recommendations were adopted by the Cabinet. In August 2008, Steven van Eijck was asked by the Queen’s Commissioner in Utrecht to serve as informateur to try to resolve the province's administrative crisis. Two weeks later, the assembly of party chairmen adopted by a large majority his advice on the formation of a workable, stable coalition that could count on a majority in the Provincial States. On 7 November 2008, the Council of Ministers approved the proposed appointment by the Queen of Steven van Eijck as chair of the Advisory Board on the Administrative Burden (Actal). The recommendations to the government and States General relate primarily to Cabinet policy aimed at reducing red tape. This policy is coordinated by a ministerial steering party led by Prime Minister Balkenende.

Steven van Eijck became a member of the Economic Affairs Council of the diocese of Rotterdam (REA) in 2003. Cardinal Simonis, on behalf of the Netherlands Conference of Bishops, appointed him member of the Committee for Consultation with the Government (COMO) as of 1 May 2004. On 3 January 2007, during the General Audience, Pope Benedict XVI thanked Bishop Van Luyn and Steven van Eijck for their work in defending the rights of children. On 1 November 2008, Steven van Eijck was dubbed a knight in the Papal Order of the Knights of the Holy Sepulchre of Jerusalem by His Eminence John Patrick Cardinal Foley.

RotterdammerWhen it was set up in 2004, Steven van Eijck was appointed (until 1 October 2007) chair of the Economic Development Board Rotterdam (EDBR) by the Rotterdam Municipal Executive. This 'outboard motor of the executive' serves to accelerate economic growth in Rotterdam. In this capacity, he was also vice-chairman of the International Advisory Board (IAB, chaired by Ruud Lubbers), the international think-tank of the EDBR. Steven van Eijck was decorated by the Mayor of Rotterdam with the Wolfert van Borselen medal for services rendered. On 1 October, he was appointed facilities coordinator and later chair of the Governing Board of the Rotterdam European Youth Capital Association. This association received starting capital of € 55 million from the Municipal Executive, to put Rotterdam on the map as Youth Capital of Europe in 2009. Since then, the European Commission, via EU Commissioner Jan Figel, has given its patronage to this initiative.

Since May 2006, Steven van Eijck has chaired the National General Practitioners' Association (LHV). The LHV has existed for over sixty years. It was set up in 1946 as a professional association, to represent the interests of individual general practitioners and the professional group as a whole. The management statement 'Care Initiative 2006-2010' focuses on the general practitioner and the patient. Steven van Eijck is also a member of the federation board of the Royal Dutch Medical Association (KNMG).

Steven van Eijck is a columnist for the Algemeen Dagblad (AD). He is a member of the Board of the Taxation and Customs Museum in Rotterdam and chair of the 'Grote Financiën' prize awarded by the Ministry of Finance. In July 2008, Steven van Eijck was inaugurated by Minister Verburg in the Task Force for Financing the Dutch Landscape (chaired by Prof. Alexander Rinnooij Kan). In the autumn of 2008, Steven van Eijck was appointed chair of the 'NL Kabel' (the association of cable companies in the Netherlands) appeals committee.