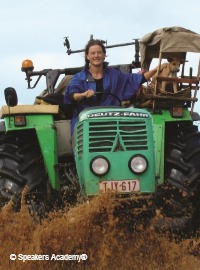 Manon Ossevoort has set one of the most bizarre, and rather extreme World records: shes the first woman to travel all the way to the South Pole… by tractor.Over 38.000 kilometers shes covered from...

Manon Ossevoort has set one of the most bizarre, and rather extreme World records: shes the first woman to travel all the way to the South Pole… by tractor.Over 38.000 kilometers shes covered from the Netherlands and through the most divers countries and landscapes. With her Tractor Girl project the Dutch actress and theatre-maker wanted to create a real (and real-life) adventure story about having dreams, and more important, about doing them!On the 9th of December, 9 years after starting, Manon arrived with her tractor at the geographic South Pole. An emotional and magical moment. Impressions and stories of this epic adventure can be found on this website.Manon tells her story from the early stages of having a dream and starting to plan pragmatically (but never having done anything special like organizing a bingo), up to bouncing through the dessert on her tractor, and being followed by the Worlds media.She likes to share with her audience the funny and often hopeful stories she experienced on her way through Europe, the Balkans, Africa and on Antarctica. For over four years Manon filmed portraits of inspiring people and initiatives while traveling, and she filmed herself on her tractor-journey. This film-footage is now being turned into a documentary movie. Her (interactive) talks show a large range of these beautiful images and stories.Manon Ossevoort uses her talents as an actrice and story-teller to take her audience on epic adventure to a World of infinite possibilities and inspiration.