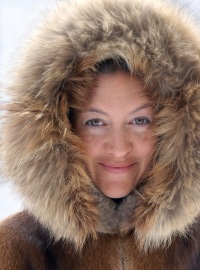 Kari Herbert first started travelling at the age of ten months when her father, pioneering explorer Sir Wally Herbert, took Kari and his wife Marie to live with a tribe of Polar Inuit for over two...

Kari Herbert first started travelling at the age of ten months when her father, pioneering explorer Sir Wally Herbert, took Kari and his wife Marie to live with a tribe of Polar Inuit for over two years on a remote island off the coast of Northwest Greenland. Her first language was Inuktun, the local dialect of Greenlandic. At the age of four Kari accompanied her parents on another trip that took them through winter blizzards in a caravan to spend time with the Sami of Lapland. Kari has continued to travel extensively ever since, and is now an acclaimed author, photographer and speaker.

Her work has been published in magazines and newspapers all over the world, including the Sunday Times, Telegraph, Mail on Sunday, Independent and the Guardian, as well as Geographical and Traveller magazines among many other internationally respected publications. She has had several solo exhibitions of her photography in the UK and Europe.

Kari has taken part in various programmes on both television and radio for the BBC, and has an ever-increasing repertoire of voice-over work for TV documentaries, radio, multi-media presentations, and adver-tising.

Since the publication of her first book The Explorers Daughter, Kari has been in demand as a public speaker. She has lectured to a full house at the Royal Geographical Society (R.G.S.) and held captive audiences at the International Edinburgh Book Festival, the Scott Polar Research Institute, the National Maritime Museum and the Design Museum; she has undertaken a UK tour as a speaker for the R.G.S., and is regularly asked to appear at literary festivals, AGMs, schools & colleges and well-known institutes and societies.

Karis talks are motivational, informative, thought-provoking and entertaining. Using sound, film and a stunning collection of images, she transports the audience into the world of exploration.

Kari is now working on her second book: Heart of the Hero: The Women Behind Polar Exploration. Documentaries of both books are currently under offer and Kari has recently been approached by the BBC and other broadcasters with the possibility of doing other television presenting work.

Kari is the director of Polarworld Ltd, an independent publishing company that specialises in producing highly creative, educational, and inspirational projects that focus on bringing awareness of the Polar Regions and other fragile eco-systems, or wilderness places that support indigenous culture to a diverse audience. She is a fellow of the Royal Geographical Society and a member of the Explorers Club, New York.

The Explorer's Daughter: A Young Englishwoman Rediscovers Her Arctic Childhood