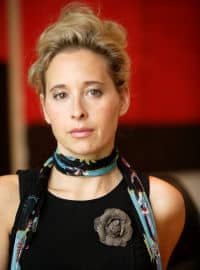 'IOU: The debt threat and why we must defuse it'

Noreena Hertz was born in London as the daughter of Jewish immigrants from Israel. She is the great-granddaughter of British Chief Rabbi Joseph H. Hertz. Only 16 years old, she attended the University College London (bachelor's degree) and continued her education at the Wharton School of the the ...

Noreena Hertz was born in London as the daughter of Jewish immigrants from Israel. She is the great-granddaughter of British Chief Rabbi Joseph H. Hertz. Only 16 years old, she attended the University College London (bachelor's degree) and continued her education at the Wharton School of the the University of Pennsylvania (MBA in 1991), before attaining her PhD in Economics from the University of Cambridge (King's). At the invitation of a professor at Wharton, she then went to Russia to work for the World Bank and play a part in setting up the Russian stock exchange and in advising the Russian government on its privatisation programmes. As one of the youngest co-workers Noreena Hertz was sent to factories to see with her own eyes what the policy of the World Bank meant for workers and managers. Her disenchanted and highly critical Cambridge doctoral thesis, 'Russian Business Relationships in the Wake of Reform', dispelling the myth of Russia's successful transition to a market economy and questioning the bank's requirements, was published in 1996.

She then turned her attention to the Middle East Peace Process, where she headed a research team of Palestinians, Israelis, Jordanians and Egyptians.Their goal was to find out whether economic co-operation could be an option in this region. Noreena Hertz had her own television show, 'Politics isn't working'. During 2005 she served a six month professorship in Global Political Economy at the University of Utrecht, the Netherlands. As of 2006, Hertz is a fellow and associate director at Cambridge's Judge Business School. Some consider her to be the European answer to Canadian publicist Naomi Klein.

Hertz is worried about the negative effects of neo-liberal globalisation. She wants to restore the power of the national governments, which has been destroyed by the economic power of multinational companies. Her solution to the problems globalisation is causing is a left-wing social-democratic policy. She attended so-called anti-globalist demonstrations (for example in Prague, 2000). Her former positition at the World Bank, worldwide one of the most important neo-liberal organisations, and her academic background have made her one of the leading ideologists of the anti-globalist movement. In recent years Hertz has tried to persuade the governments in the Western world to cancel all the debts owed to them by the world's poorest countries. 'Those countries in Africa, Asia, and Latin America, cannot repay the debts, because to do so they have to pay an unacceptably high price, mainly at the expense of their poor or sick', writes Hertz in her book 'The debt threat'. She claims most of the debts were racked up by authoritarian, unelected regimes that were supported by the rich countries, but are now long gone.

She wrote a number of books about this subject and many articles, that have published in magazines such as The Observer, New Statesman and theWashington Post.

Russian Business Relationships in the Wake of Reform

The Silent Takeover : Global Capitalism and the Death of Democracy

The Debt Threat : How Debt Is Destroying the Developing World

IOU: The Debt Threat and Why We Must Defuse It