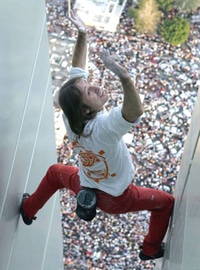 When he was a child, his heroes were Bonatti, Rébuffat, Desmaison, some of the most famous rock-climbers of all time. Alain Robert was brought up with their lyric, epic adventures. He decided to...

When he was a child, his heroes were Bonatti, Rébuffat, Desmaison, some of the most famous rock-climbers of all time. Alain Robert was brought up with their lyric, epic adventures. He decided to become a top climber, but his parents did not much appreciate such a desire. He did not want them to find out that he started to learn the rudiments of climbing as a boy scout. He learnt how to move, how to handle the ropes, so as to become a climber like his heroes. When he was 12, he climbed eight floors, got home by the window as he had forgotten his keys…

His parents gave up. Alain used to train on the cliffs around Valence, his home town (south of France). He became a top climber. His motivation? Calculated risk. Mastering his fear… So Alain Robert decided to climb solo. This meant: climbing with his bare hands. No ropes for his protection. You fall, you die. He climbed solo the most extreme cliff faces. First of all he used to rope up, check out the moves and holds.

He had two serious accidents in 1982. Especially a 15-meter fall, head first. He was rappelling. His rope came undone. Coma (5 days) and multiple fractures : cranium, nose, wrists, elbows, pelvis and heels. The prognosis was no joke at all : â€œthis guy will never be able to climb againâ€. After effects: vertigo, caused by disease affecting the inner ear. Verdict of the French national health organization: disabled up to 60%.

A year later, Alain Robert got back to the cliffs and soon reached back the top level, stronger than ever. In 1991 Patrick Edlinger gave him an award for his performance at Janssens Festival. Two years later, Juan Antonio Samaranche gave him the IOC (International Olympic Committee) award for his performance. He also achieved a world record for the most extreme solo performance, in the gorge of the Verdon (south of France).

Sector - a sponsor, specialist in extreme sports, adventure - offered him to shoot a documentary. They suggested him to climb skyscrapers. In 1994, Alain Robert climbed his very first skyscraper, in Chicago. The 'Urban Climber' was born. Alain realized that he enjoyed climbing what seemed impossible. After all, he was also aware that it offered him a chance to earn a living. So he went around the world searching for the skyscraper of his dreams… He was also sent to jail many times as he climbed without authorization. But it did not much matter: Alain Robert would rather stay in a prison than in a hospital. Meeting people (presidents and prisoners, kings and shanty town folks) was one of the trips highlights.

Alain Robert is known for his bold ascents, but the public is unaware that he often climbs to collect money for charity. In 1997, he climbed - without authorization - the worlds tallest skyscraper in Kuala Lumpur.

The impact on the media was so great that Sabah Foundation asked him to climb its building in Borneo. With government authorization, the event grew extensively, drawing a crowd of 15,000 people. The event raised over $150,000.

In Paris, the association ADT Quart Monde requested his presence for a rappel, to promote the opening of the empty flats of the capital to the homeless. It was quite an event, with the presence of Mrs. Bernadette Chirac and Mrs. Geneviève de Gaulle.

In eight years, Alain Robert climbed over 100 skyscrapers and mythical monuments around the world. His greatest success so far: the ascent of the National Bank of Abu Dhabi with over 100,000 spectators!