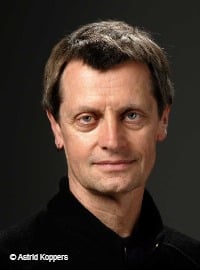 Vincent Icke is Professor of Astrophysics at Universiteit Leiden and Professor of Cosmology at the University of Amsterdam, in The Netherlands. He is head of the Theory Group at Sterrewacht Leiden....

Vincent Icke is Professor of Astrophysics at Universiteit Leiden and Professor of Cosmology at the University of Amsterdam, in The Netherlands. He is head of the Theory Group at Sterrewacht Leiden. He studied theoretical physics and astronomy at Utrecht, and in 1972 obtained a doctorate (for a study of galaxy formation and large scale cosmic structure) at Leiden. He has held postdoctoral positions at the University of Sussex, Cambridge University, and the California Institute of Technology. After serving as a junior faculty member at the University of Minnesota, he came to Leiden in 1983. At present, his main research interests are cosmology, the ‘cosmological constant’, the formation of structure in the Universe, and radiative hydrodynamics. He teaches University courses in cosmology, astrophycics, and radiative processes.

Recently, he was instrumental in the founding of the Faculty of Arts at Universiteit Leiden. Besides his academic pursuits, Vincent Icke takes an active interest in the popularization of science. The third printing of his book The Force of Symmetry, describing for a wide audience the current developments in theoretical particle physics, was published by Cambridge University Press. He wrote three collections of newspaper columns, entitled De eekhoornformule(‘The Squirrel Formula’), Passie en precisie(‘Passion and Precision’) and Dat kan ik mij niet voorstellen(‘Imagine That’), as well as popular books on (astro)physics: Krachten(‘Forces’), Christiaan Huygens in de OVTT(‘Christiaan Huygens, Past and Present’), Niks relatief(‘Relative ain’t’), De canon van de natuurkunde(‘The Physics Canon’), and De ruimte van Christiaan Huygens(‘Christiaan Huygens’s Space’).

Vincent Icke was honoured with the tri-annual Willem de Graaff Award for the popularization of science. He is also a visual artist, whose work covers a wide range of styles, media, applications and concepts (see the Alien Artwebsite). He was guest lecturer at the Gerrit Rietveld Academy and at the DasArts School in Amsterdam and at the Rijksacademie voor Beeldende Kunsten in The Hague. He has participated in over a hundred of productions on radio, film and television (Teleac, Nieuwslicht, Nationale Wetenschapsquiz, DWDD, Een Vandaag, NOVA, Hollands Licht, Opium, Kunstlicht, and many others). His recent exhibitions were at De Harmonie (Groningen, autumn 2008), Galerie Zone (Leiden, September, October 2009), Galerie LUMC (Leiden, October-November 2009) Centre for the Visual Arts at Amstelveen (2010). On September 3rd, a solo exhibition in CBK Ede opened, and on November 28 a solo exhibition at Galerie Cattani in Leiden. An exhibition in the Van der Togt Museum is being planned.