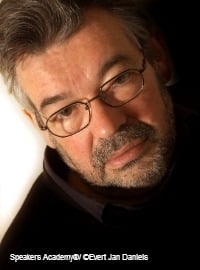 Prof. dr. Maarten van Rossem studied History in Utrecht. After graduation he joined the ‘Institut für Europäsiche Geschichte’ (Institute for European History) in Mainz, Germany. 1971, he became a scientific assistant to the Institute for History in Utrecht. Van Rossem took his doctor's degree in 1983 with his dissertation 'The radical temperament. The double conversion of a generation of American intellectuals 1934-1953)'.

In 1997, Maarten van Rossem was appointed special professor who holds the Chair 'Dutch culture in an international context'. He regularly comments on political and cultural issues. Prof. Van Rossem, 'Historian of the year 2003', has written a number of books, including 'The United States in the 20th Century'.