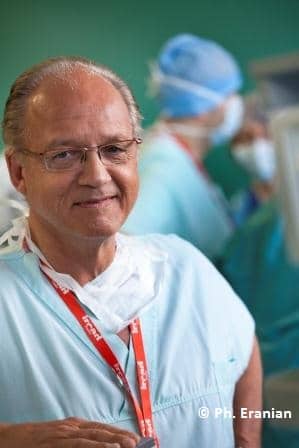 Jacques Marescaux was born in 1948, as the eldest in a family of academics and servicemen. His father was a histology Professor at Strasbourg’s school of medicine and his grandfather was a major-general. After successfully completing his secondary studies, he registered at Strasbourg’s school of medicine and quickly discovered his vocation, as shown by his first five years of studying during which he came first at each ranking exam.

In 1971, he came first at the Residency program’s examinations, which allowed him to choose his training ship. The different semesters of the residency allowed him to discover the joys of gynecology, the strictness of orthopedic surgery, the subtleties of cardiovascular surgery and the diversity of visceral surgery, a field that he would finally choose.

It quickly became obvious to him that surgery could not be isolated either from its scientific context or from its applied clinical research. This is why he quickly joined an INSERM (French Health and Medical Research National Institute) team dedicated to digestive pathologies. This scientific cooperation allowed him to be promoted as chief resident in 1975, University Professor for Digestive Surgery in 1980, and then head of department in 1989.

He quickly tied his first links with the industrials, not only attracted by the financial means they bring, but mostly because of their underlying values needed for the development of medical research: efficiency, rigor, and a respect for ethics. In 1992, he came up with the idea of creating an original center for research and training in partnership with leaders of the surgical industry. This would allow him to:

- Develop research using different criteria for excellence from national institutes, as these uniformly implement rules adapted to the main disciplines, but miles away from real clinical issues

- Start the future technological revolutions in the field of surgery, and not to fall behind them

- Integrate new means of telecommunication, as this has become a great challenge on a cultural, political and global scale. He is convinced that surgeons should not only participate to this new information era, but mostly be its best ambassador.

These ideas came to life with the inauguration of the IRCAD (Research Institute Against Digestive Cancer) and the EITS (European Institute of Telesurgery) in June 1994. In this center, researchers, IT technicians, robot engineers and internationally renowned surgical experts would congregate.

Virtual reality is one of the Institute’s most important axes. It translates real data into digital data, thus allowing turning a medical scan into a virtual 3D clone of the patient. The surgeon can then prepare the procedure on the patient’s virtual clone, as these simulations are becoming increasingly realistic. During the intervention, the superimposition of virtual data on real data (Augmented Reality) permits a transparent view that should soon allow for the automation of complex surgical movements.

This automation will only be possible by developing the field of surgical robotics, another domain in which the IRCAD has largely demonstrated its excellence. Since 1994, the IRCAD has participated in numerous projects aiming at optimizing the use of robots. The surgical procedure carried out in 2001 from New York on a patient in Strasbourg (Operation Lindbergh), is a spectacular piece of evidence for this, as it demonstrates for the first time that there are no geographical constraints to performing a surgical intervention, even if the American Army claimed two months before that it was not feasible.

The main objective of the IRCAD is to develop less invasive surgery. Therefore, a new concept was started in 2004 with the project ANUBIS. It is called “transluminal surgery through natural orifices”, a technique which leaves no cutaneous or muscular scars. This project, certified by the competitiveness pole for therapeutic innovations, allowed for the development of new surgical instruments and authorized the IRCAD team to perform the first surgical intervention through natural orifices on April 2, 2007.

Such a great number of surgical developments necessitated the development of a new training center, the EITS. In sixteen years, the center has acquired an international reputation for excellence, as demonstrated by the number of surgeons registering for the training courses. Indeed, each year, 4,000 surgeons from all over the world come over to the EITS to train. This would not be possible without the availability and talent of an international faculty of 800 experts. The courses involve digestive surgery, urological surgery, vascular surgery, orthopedic surgery and gynecological surgery. The quality of this training is certified by European accreditation (EACCME) and by American accreditation (American Medical Association).

Given the tremendous success of IRCAD’s program, Jacques Marescaux also created a branch of the IRCAD in Taiwan (under the name of Asia IRCAD-AITS). This center was inaugurated on May 26, 2008. A new mirror institute has opened in Barretos, Sao Paulo’s state, Brazil, in July 2011.

Professor Marescaux’s teaching hospital experience and background, as well as the genuine and beneficial links he had set with the Industry, made it possible for him to be appointed President of the Alsace Region’s International Therapeutic Innovation Pole from 2005 to 2007.

In eighteen years’ time, Jacques Marescaux and his team successfully published 2,920 national and international articles, as well as communications, some of them in such prestigious journals as Nature, Science, Annals of Surgery, Archives of Surgery and the New England Journal of Medicine. Jacques Marescaux was invited to deliver more than 260 speeches in many European, American, Japanese, and Chinese Universities or Schools of Medicine, amongst which the "Address to Diplomates" he gave at the Royal College of Surgeons in London, the Nobel Lecture he gave in Stockholm, and the Fogarty Lecture he gave at Stanford University.