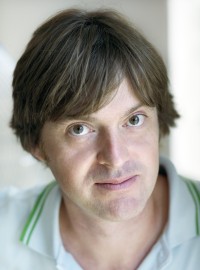 A unique specialist in Nothern and Western Africa

Gerbert van der Aa is a Dutch historian and journalist, who specialises in Northern and Western Africa. He writes articles for various magazines and newspapers in the Netherlands. As an expert he appears regularly on radio and television. His book 'Nigerian situations. A journey through Africa's ...

Gerbert van der Aa is a Dutch historian and journalist, who specialises in Northern and Western Africa. He writes articles for various magazines and newspapers in the Netherlands. As an expert he appears regularly on radio and television. His book 'Nigerian situations. A journey through Africa's most corrupt country' was published in 2006 and nominated for the prestigious Bob den Uyl Prize. His second book 'Across Sudan, a friendly rough state on the Nile' was published in September 2007.

Typical Africa reporters usually travel with Western aid organisations to write predictable stories on all kinds of misery. Not Van der Aa. He always seems to find original angles that make his readers think. Reading between the lines, it becomes clear that the situation in Africa might not be as bad as most of us believe. He discovered that stories about famine are often exaggerated. In Nigeria he found out that Shell, despite the criticism of local activists, is more committed to the environment than the local population.

Van der Aa has a remarkable way of traveling. Often he gets on decrepit, overloaded buses. Or he travels through various African countries on top of trucks that are loaded with bags of flour or dates. Van der Aa regularly travels by car from the Netherlands to Africa, where he crosses the Sahara desert. At his destination he sells the car to help finance the journey. Van der Aa tells surprising stories that are usually not heard in the Western media.

1.   War in Darfur (Sudan)
2.   The exaggeration of the famine problem in Africa
3.   Shell in Nigeria
4.   Why giving aid to developing countries fails
5.   Driving over Saharan dunes
6.   Sharia in Nigeria
7.   Car exports to Africa
8.   Illegal Africans on their way to Europe
9.   Muslim terrorists in Algeria
10.   Football (soccer) in Africa
11.   The cultural background of Moroccan Berbers in the Netherlands
12.   African roots of the blues
13.   Colonel Gaddafi
14.   Why our image of Africa is too negative
15.   The Sahara is getting greener
16.   Succesful companies in Africa
17.   The revolution in the North of Africa