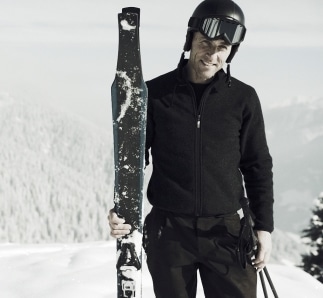 Perspectives for Change What motivates someone to give up a successful Wall Street career, move themselves and their family halfway around the world, and take a chance with a small start-up ski brand ...

Perspectives for Change What motivates someone to give up a successful Wall Street career, move themselves and their family halfway around the world, and take a chance with a small start-up ski brand in the Swiss Alps? Benedikt Germanier was a Chief Strategist at UBS, secure with all the comforts of a high-flying career in global finance, when he decided to swap it all to become CEO of Zai, a ski manufacturer with just 12 employees in the mountains of Graubünden. Unlike his colleagues in the banking world, Benedikt was never motivated by bonuses or career glory. A professional ski instructor and tennis coach, he studied economics before pursuing a career in global finance. But when the financial crisis rocked Wall Street, the difference between his values and those of the industry he worked for became starkly clear. Benedikts role as a finance expert for top broadcasters such as Bloomberg allowed him to observe the banks response to the crisis. He quickly realised that, instead implementing change, the industry was adopting a strategy of damage limitation, obfuscation and denial. Ignoring the advice of colleagues, he left his job and chose instead to follow his passions. Moving back to his native Switzerland, he took the role of CEO at Zai, successfully guiding the company from little-known start-up to a global brand with 60 dealerships worldwide and partners including Bentley Motors and the FIS World Ski Championships. Benedikts speeches are a call to action. He has a gift for inspiring people, giving them the impetus to change perspectives and take a fresh look at situations. His story illustrates what it means to break through old patterns and solve problems. He will the first to admit that this path is not always easy — but ultimately, value-based decisions are always rewarded. Whether for the individual or on a company level, taking those first brave steps off the trodden path never fails to open up doors to newfound freedoms.