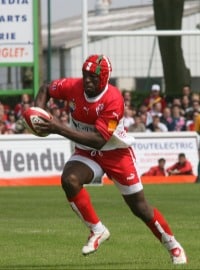 One of the best international Rugby player and team's performance consultant

"Convey powerful messages to reinforce the team spirit and wellbeing of your staff, who deliver your team’s performance"Serge Betsen was born on 25th March 1974 in Kumba, Cameroon. He first arrived ...

"Convey powerful messages to reinforce the team spirit and wellbeing of your staff, who deliver your team’s performance"

Serge Betsen was born on 25th March 1974 in Kumba, Cameroon. He first arrived in France with his family when he was 9 years old. He discovered rugby when he was 12 at the Club of Clichy la Garenne.

In 1991, he left Clichy to study in Bayonne and joined the Biarritz Olympique club.

He got his first cap with France on 22nd March 1997 against Italy. In 2000, he took part in the first 6 Nations tournament. Nicknamed the "Grim Reaper" or "shears" because of his famous tackles and fast starts, he is considered to be the best tackler in the world by many rugby experts and is feared by all his opponents. He was voted best player of the French championship in 2002 by l’Oscar Midi Olympique, in 2004 he was nominated by the IRB for the title of best World player.

In May 2008, he was signed with London Wasps and was captain for two seasons.

Serge Betsen is today a member of the ‘Champions for Peace’ club, a group of 54 famous elite athletes committed to serving peace in the World through sport, created by Monaco?based international organisation Peace and Sport.