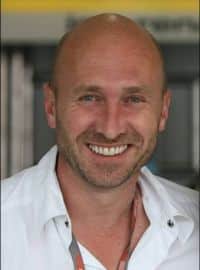 At the age of 46, Perry McCarthy is one of Britain’s top racing drivers and is already part of motor racing folklore. His appeal however has been dramatically widened to car lovers everywhere after being disclosed as 'The Stig' (the secret racing driver in black) as seen on BBC Top ...

At the age of 46, Perry McCarthy is one of Britain’s top racing drivers and is already part of motor racing folklore. His appeal however has been dramatically widened to car lovers everywhere after being disclosed as 'The Stig' (the secret racing driver in black) as seen on BBC Top Gear

McCarthy’s rise through the ranks along with close 'Rat Pack' friends Damon Hill, Johnny Herbert and Mark Blundell, has been against all odds and in a sport dominated by finance he recalls how he 'started with nothing and then lost it all!'

Perry's 10-year fight to reach the sport's elite paid off in 1992 when he was chosen to drive for the fledgling Andrea Moda Formula One organisation. The dream however turned into a nightmare as the team stumbled from one disaster to the next and in recent years he has turned his attention away from Grand Prix to Le Mans and the demands of Sports Prototype racing.

As always, Perry’s exploits are well chronicled but when he is on the track his talent and determination shine through. His sense of humour is legendary and is frequently aired in his articles for leading publications and in his work as a TV commentator and programme presenter.

McCarthy’s bubbly personality and absolute refusal to concede defeat have made him popular with the press; The Telegraph headlined him as "a new cult hero" The Times called him "the world's unluckiest racing driver" and America's Sunday Express described him as a "comedian locked inside a racing drivers body".

In a career spanning over twenty years, McCarthy is still smiling and still fighting. However, away from the track, Perry has used his experiences to become a superb 'after dinner' and 'motivational' speaker who gives a highly amusing insight to the world's most glamorous sport.

His hilarious autobiography Flat Out, Flat Broke, launched in July 2002, has already become a motor racing best seller and has received rave reviews:

1.   After dinner speaking (Funny stories about being a racing driver, being the Stig, news in Formula One)
2.   Motivotional speaking (Dedication, determination, succes and faillure, teamwork and communication)
3.   Question and answer sessions
4.   Master of ceremonies/award dinners etc.
5.   On track driving (giving guests fast laps on a race track)