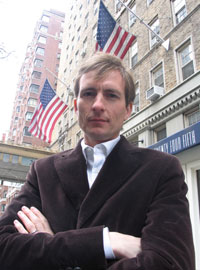 How to become an American

Michiel Vos is a filmmaker for the American TV channel HBO. His last two documentary films premiered in January and February of 2009: The Trials of Ted Haggard, about fallen evangelical pastor Ted...

Michiel Vos is a filmmaker for the American TV channel HBO. His last two documentary films premiered in January and February of 2009: The Trials of Ted Haggard, about fallen evangelical pastor Ted Haggard and Right America Feeling Wronged, about the 58 million people who did not vote for Barack Obama and their ‘bitter’ outlook on the current political and cultural state of affairs. These movies as well as earlier films about the elections in 2004 and evangelical Christians have enabled Michiel to travel extensively through America.

Michiel is currently working on his film How to become an American – in which Michiel tries to answer the question what it really takes to become an American citizen (which happened in Sept. ’09). Along the way, he talks to fellow immigrants (or children of immigrants) like President Barack Obama, Governor Arnold Schwarzenegger, KISS frontman Gene Simmons, Hollywood director Paul Verhoeven, Secretary Madeleine Albright, Fashion Designer Diane von Furstenberg, and a host of other famous Americans.

Michiel gives speeches about his political American experience both in the Netherlands and in the US and writes a column for the Dutch business monthly Excellent Business. Before permanently moving to America in 2003, he worked in New York for Dutch TV correspondent Max Westerman during the 2000 presidential elections. He attended the University of Massachusetts at Amherst during his freshman year in 1989-1990, after which he got his law degree from the University of Amsterdam with extensive courses taken at the Panthéon-Sorbonne University in Paris. He started his career as a lawyer for Landsadvocaat firm Pels Rijcken & Droogleever Fortuijn.

Michiel is married to HBO filmmaker Alexandra Pelosi. They have two sons and live in Manhattan.