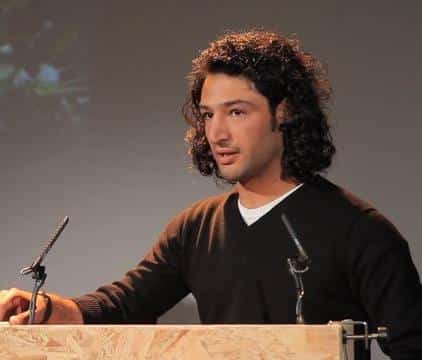 Co-Creator of the Mine Kafon

Born in Afghanistan in 1983, Massoud Hassani moved to Holland in 1998 in search of a new life. As a child in Kabul, he would make all kinds of toys, sculptures and paintings. By the age of 9 he...

Born in Afghanistan in 1983, Massoud Hassani moved to Holland in 1998 in search of a new life. As a child in Kabul, he would make all kinds of toys, sculptures and paintings. By the age of 9 he learnt to weld and worked as a car mechanic. So you can imagine it was an enlightening moment when he arrived in the Netherlands and discovered that there was a profession called “product designer”. So, as soon as he was able, he enrolled to study at the Design Academy Eindhoven. Having adopted a new lifestyle and cultural habits, he focused his study to research on building a bridge between those two cultures. He graduated in 2011 and now works from his own studio with his brother Mahmud Hassani in Eindhoven, The Netherlands.

Massoud Hassani designed and built, by hand, a wind-powered device, The Mine Kafon, heavy enough to trip land mines as it rolls across the ground. He drew his inspiration from his childhood. Growing up on the outskirts of Kabul, he would play there with his younger brother with their homemade, wind powered toys. These would sometimes get lost, blown astray they would roll out into the desert landing amongst landmines, too dangerous to retrieve. These landmines often cause accidents especially among children that would play near them.

The Mine Kafon is approximately the height of a man. The core of the Kafon is a 17kg iron casing surrounded by dozens of radiating bamboo legs that each has a round plastic "foot" at their tip. Inside the ball is a GPS unit to map where it has been – and in theory land cleared of mines. The data will be available in real-time accessible online. The feet act as a suspension mechanism, which allows the entire Kafon to roll over bumps, holes and so forth. The designed weight is enough pressure to trigger a landmine as it is about as heavy as a person, mimicking the footstep of a human being. With each detonation the Mine Kafon loses just one or two legs so it could potentially destroy three or four landmines in one journey. The total cost of one is about $60 USD. It is faster, safer and up to 120 times cheaper than the traditional techniques.

In countries with war-ravaged pasts, concealed landmines pose a silent, hidden threat. Lurking underground for years, they risk throwing open fresh wounds in communities which are just beginning to heal. Using Mine Kafon we can get rid of landmines very quickly. Even if it hits only 1% of the landmines worldwide, then we are still talking about millions of landmines. In this way we can also save billions of dollars and invest that money in affected countries, to build schools, hospitals, agriculture and industry. The Mine Kafon project could help to rebuild economies and give the inhabitants hope and a bright future without fear.

Besides raising the awareness about landmines issues among the general public, university professors and the media, Massoud Hassani have also achieved, through Kickstarter, to receive the support of over 4000 people and raised a goal of 100,000 pounds in order to take the Mine Fako to the next step further.

Massoud Hassani, along with his brother Mahmud, has been invited and has taken part to many conferences, events, exhibition, talk show and speeches, in many countries around the world, including France, The Netherlands, Belgium, Taïwan, Germany, USA, Poland, Italy, South Africa, Finland, UK, etc.