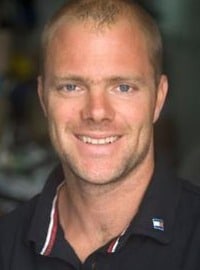 At the age of six, Gerd Jan Poortman started sailing. From the age of twelve, he participated in different sailing competitions. At that time he participated in several boats in races all over the world and he managed to win several titles. His professional sailing career started in 1999 with a victory in the Admiral's Cup.In March 2005, Gerd-Jan Poortman was selected as one of the high potentials for the second boat of Team ABN AMRO. The front of the boat was his domain. Already in the first leg Gerd-Jan and his team broke the 24-hour speed record for monohulls. But on the way to Wellington (NZL) Poortman got injured and he was forced to stay ashore for several stages. The talent team eventually finished in second place overall. After the first boat of ABN AMRO. In 2008/2009 Gerd-Jan sailed his second Volvo Ocean race for Team Delta Lloyd.In 2009, Poortman took part in de Fastnet Race on board of the "Eclectic". In 2010 he won the IRC 1 class in the North Sea Regatta aboard the "Who's Next". Along with Bouwe Bekking and Gideon Messink he put on a campaign in 2012 to get a Dutch participant in the Volvo Ocean Race 2014-2015. They succeeded and he sailed on board of Team Brunel.Gerd-Jan is an inspiring and enthusiastic speaker about his experience in the Volvo Ocean Race and many other sailing events. He can speak on many different subjects. His presentations are full of examples, stories and beautiful movies and pictures. He tells a captivating story about the adventurous live of an ocean sailor. You can experience his passion for the sport. His presentations are supported by the use of examples, anecdotes and impressive footage. He talks about his experiences in the longest and toughest sailing race in the world and his stories handle all aspects of team building, leadership, collaboration, communication, innovation and development.