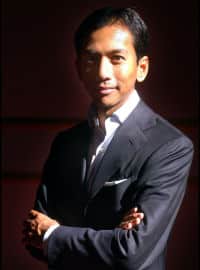 Wibi Soerjadi was born in Leyden. An accomplished piano player, he already made a name for himself early on. In 1985 when he was just aged 15 he won the first prize at the Prinses Christina Concours...

Wibi Soerjadi was born in Leyden. An accomplished piano player, he already made a name for himself early on. In 1985 when he was just aged 15 he won the first prize at the Prinses Christina Concours in the Hague. Three years later he won first prize at the National Eurovision Competition for young musicians. He won third prize at the 1989 International Franz Liszt Pianoconcours in Utrecht, where he was the youngest participant. Already after only four years of study at the Sweelinck Conservatory in Amsterdam, he was allowed to graduate and was graded with a ten, for overall perfection. His star rose quickly as a performing artist in front of television camera's. His charisma and communicative approach endeared every public to him. In order to revive an old tradition, Soerjadi gave his first Christmas recital in the Concertgebouw in Amsterdam in 1993.

As a pianist he performes all over the world with leading orchestras like theTchaikovsky Symphony Orchestra Moscow, the Radio Philharmonic Orchestra, the Residentie Orkest, the Rotterdam Philharmonic Orchestra, and the Leipzig Gewandhaus Orchester, under the direction of the most famous directors, including Evgeny Svetlanov, Vassili Sinaisky, Vladimir Fedoseyev and Sergiu Commissiona. In 2004, he did a tour in China.

In 2005 by invitation of Disneyland Paris Wibi Soerjadi played at the jubileeconcert in honour of 50 years of Disneyland. He also played for German television, winning the prestigious Echo Klassik Award. Furthermore he performed in Italy and Spain, and to great acclaim won the Edison Classical Music Award. Soerjadi released a series of very successful cd's in 2000, 2003 and 2004, all of these became gold-selling records. Wibi Soerjadi relocated to a beautiful country estate, De Wulperhorst te Zeist, where he has his own small concert hall. Occasionally Wibi Soerjadi is available for lectures. His topics include a metaphor of music and communication, leadership, and motivation.