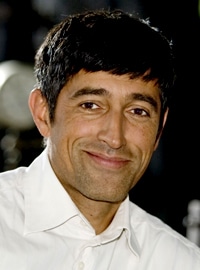 Ranga Yogeshwar is one of the best known TV presenters in Germany, well known for moderating such programs such as the german IQ show and various science programs. He also sits on several juries. He commenced his professional career in journalism in 1983, initially working with various publishing ...

Ranga Yogeshwar is one of the best known TV presenters in Germany, well known for moderating such programs such as the german IQ show and various science programs. He also sits on several juries. He commenced his professional career in journalism in 1983, initially working with various publishing houses, later leading on to activities in Radio and Television. During a sojourn in India in 1985, he conducted seminars and conferences at the Indian Institute of Science, Bangalore and other institutions. Since 1987 he has been active as Science Editor at WDR-Germany TV, the nationwide German TV-network of public rights.He presented and produced innumerable programmes (Wissenschaftsshow, Kopfball, Bilder aus der Wissenschaft, Lillipuz, Wissenschaft Live, Globus). Between 1995 and 2001, he was Acting Chief and between 2001 to 2005 the Chief of the Science TV Programme Group at WDR. After a sabbatical in 2005-2006, Yogeshwar founded his own company xplainy. GmbH and works as an independent author and moderator. As of now, he presents TV programmes: "Quarks & Co" (WDR), "W-wie-Wissen" (ARD), "Wissenschaftsforum" (Phoenix) and "Die Grosse Show der Naturwunder" (ARD).Yogeshwar has over 1000 TV shows and many Radio presentations to his credit. He is author/co-author of several newspaper and magazine columns and articles in learned periodicals. He has also published many books. His other regular activities include leading group discussions, in addition to holding lectures in Germany and other countries in various parts of the world.He is engaged in many national and international projects and is member of boards and committees of institutions in the fields of Innovation, Education and Knowledge Propagation. Since years he has been supporting a project for relief of victims of land mines in Cambodia in cooperation with Misereor and was active in providing and organising help to Tsunami victims in India. He is a founder member of the Children's and Youth Foundation of Hennef. His hobbies centre on his family, music and astronomy (MPC-Code B43). The asteroid 20522, discovered by André Knöfel in September 1999, has been named after him.Ranga Yogeshwar is married to the classical soprano singer Ursula Müller. They have four children and live together with their 3 cats and dog shanti close to Hennef near Cologne, Germany.

1.   Science
2.   Physics
3.   The Physics behind everyday phenomenon
4.   Everyday life experiences explained through the eyes of a physicist