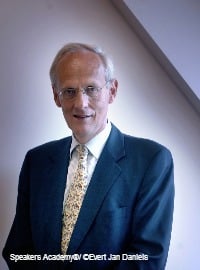 Pieter Winsemius studied Physics at Leiden University in the Netherlands. Following his doctoral exam, he was employed by the Fundamental Research on Matter (FOM) and completed his Ph.D. dissertation ...

Pieter Winsemius studied Physics at Leiden University in the Netherlands. Following his doctoral exam, he was employed by the Fundamental Research on Matter (FOM) and completed his Ph.D. dissertation in 1973. After obtaining an M.B.A. from Stanford University, he joined McKinsey & Company, where he was elected a partner in 1980. In 1982, he became Netherlands' Minister of Housing, Physical Planning and the Environment for the Liberal Party (VVD). In 1986, he rejoined McKinsey as a Director in Amsterdam. Within McKinsey, Pieter Winsemius has a special focus on the strategic and organizational developments of large organizations. In this capacity, he has served numerous multinational companies in a variety of businesses, notably including the (petro)chemical industry, agribusiness and financial institutions (banks, insurance). He has also assisted various (semi-)government institutions in the preparation of targeted policies (e.g. foreign investment, technology, environment, and physical infrastructure). Pieter Winsemius is one of the co-leaders of McKinsey's Environment Practice and a core member of its European Organization and Leadership Practice. In January 1992, he became an Honorary Doctorate from the Technical University of Delft for his contributions to environmental policy development. On behalf of the Sustainable Challenge Foundation (SCF), he is Professor in the Management of Sustainable Development at the Tilburg University. In 2006 he temporarily replaced Sybilla Dekker as Minister of Housing, Physical Planning and the Environment. Pieter Winsemius wrote four books. One is about Johan Cruyff and leadership. It is one of Winsemius's favourite topics.

1. The public cause
2. Leadership