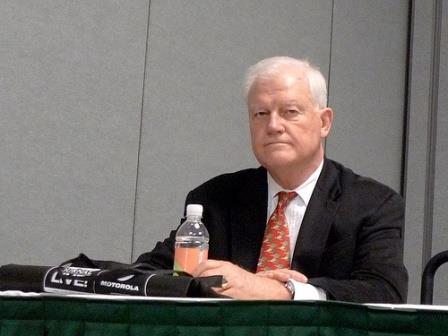 Consultant and Expert in AIDC

Paul Bergé manages his own consulting firm, providing services to manufacturers in a number of industries and technology companies. He also serves as President of Axicon Auto ID LLC. The primary focus of these consulting services is in international business development and mergers and ...

Paul Bergé manages his own consulting firm, providing services to manufacturers in a number of industries and technology companies. He also serves as President of Axicon Auto ID LLC. The primary focus of these consulting services is in international business development and mergers and acquisitions. Prior to starting his own company, Paul Bergé worked in companies such as Flextronics, Kimball, Paxar. In Japan he worked for three years as Executive Vice President of Olympus Symbol, Inc., a joint venture company between Olympus Optical Co. of Japan and Symbol Technologies, Inc. of Long Island, NY.

He has held several positions at Symbol Technologies (now part of Motorola) over a fourteen year period, including Vice President International Marketing and Managing Director of Symbol Technologies International based in Brussels, Belgium. He has been instrumental in the development of Symbol's international business in Europe, Latin America, Australia, Asia and the Pacific Rim. His involvement with the Automatic Data Capture industry started in 1975 when he joined the Plessey Company, a European pioneer in bar coding systems, in the capacity of Sales Executive Europe.

He was the founding chairman of the trade show Scan Tech Europe and the trade association AIM Europe in 1984 and is the recipient of the 1989 Richard R. Dilling Award, the highest recognition by peers in the Automatic Identification industry.

He was invited by the United Nations to lecture on bar coding in China in 1988, in support of UN efforts to help China become a better exporting country by improving the quality of packaging and by implementing bar code systems. He was also invited by the Vietnamese government to provide AIDC training services.

Paul Bergé was Vice President Business Strategy at Flextronics International where he was responsible for strategy development and mergers and acquisitions. He was Vice President International Operations at Paxar/Monarch, in Miamisburg, Ohio (now part of Avery Dennison) . Paxar/Monarch is a company providing bar code printing solutions to a wide variety of industries, as well as traditional price labeling machines for retail and other industries. Paxar Corporation is the world leader in woven and printed labels for the apparel industry.

He was born in the Netherlands, became US citizen in 2001. He graduated from Nijenrode University in the Netherlands with and MBA in International Business. He speaks Dutch, English, French and German fluently and has a working understanding of Italian and Spanish. He is a frequent lecturer on international business practices and foreign business cultures at universities in the greater Cincinnati area and teaches international business strategy as adjunct professor at Xavier University in Cincinnati.