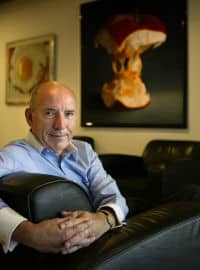 Chairman of the Public Cause

“People should care about each other again. We don't show any respect towards each other anymore, whereas respecting one's fellow-man should be natural. The human size, that is the root to the matter. The amount of civilisation does not depend on the prime-minister or a scholar. Civilisation is ...

“People should care about each other again. We don't show any respect towards each other anymore, whereas respecting one's fellow-man should be natural. The human size, that is the root to the matter. The amount of civilisation does not depend on the prime-minister or a scholar. Civilisation is to be found inside the tram guard, the butcher and the postman. If they are not civilised anymore, the country is not civilised anymore. They are the foundation of our civilisation, not the upper class", says Mickey Huibregtsen.

Mickey Huibregtsen was chairman of McKinsey & Company Benelux and Scandinavia and director of this worldwide organisation. Since his withdrawal as a partner in 1999, he stayed on as a member of MicKinsey's Advisory Board. He was born in Rotterdam. Huibregtsen studied in Leiden and Delft, where he graduated as an engineer in theoretical and technical mechanics. As a conscript he joined the Royal Dutch Marines, where he was the responsible substitute officer for the structural design of a new type of submarine. Before he joined McKinsey & Company in 1970, Huibregsten was employed by VMF-Stork in various positions, including General Manager of the Gas turbine section.

In his active period with McKinsey & Company Huibregtsen worked for many big Dutch and Belgian organisations, both private and public, such as the departments of Foreign Affairs, Economics, Finance, Justice, Agriculture, Education, Traffic and Public Works, and Health in the Netherlands. His work included the complete spectrum of strategy, operations and organisation. Outside Holland he worked for various industrial and governmental organisations in France, Germany, Scandinavia, Turkey, Great-Britain and the United States. His clients were representing the whole gamma of industrial and service rendering organisations, transport organisations, agricultural companies, the process industry (chemicals, steel, energy and textiles), financial institutions and enterprises in the field of consumer goods, electronics and telecommunication.

Mickey Huibregten's contribution to the leadership of the Firm worldwide was visible through his memberships of McKinsey's various global boards of governors.

July 1997, after an uninterrupted period of more than 16 years, he had to step down from the Shareholders Committe, McKinsey's top administrative organ, because he reached the compulsory retirement age. For many years he was chairman of the Directors Commitee, the organ that judges and honours senior partners worldwide.

He has many and various extra-curriculary activities. He is Board member of INSEAD, the international business school in Fontainebleau, initiator and charmain of the Evening of Science & Society Foundation, charman of the Jury and member of the board of New Venture (business plan competition) and Senior Counsel for PricewaterhouseCoopers. Huibregtsen has a weekly radio show on BNR News Radio and the Dutch World Service. Huibregtsen was chairman of the Dutch Olympic Committee/Dutch Sports Federation between 1990 and 1998.

De Publieke Zaak (The Public Cause) is a union of citizens, governors and companies willing to contribute to the styling of the Netherlands. The union was established November 2002 by a hundred Dutch citizend who are worried about developments in society. They started the Club of a Hundred. The Public Cause is now a broad place where people meet, a tink-tank, a project organisation and an action platform.

Mickey Huibregtsen is a popular speaker, who combines his topics with The Public Cause.