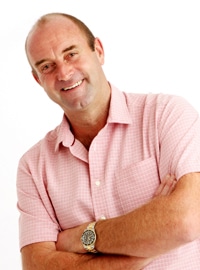 Martin is an entrepreneur who has a deep passion for inspiring people to achieve more from their life. Over the last 20 years he has built a string of profitable businesses using the teachings of...

Martin is an entrepreneur who has a deep passion for inspiring people to achieve more from their life. Over the last 20 years he has built a string of profitable businesses using the teachings of some of the world’s leading personal development gurus. Since then, he’s continued his study, becoming a Hypnotherapist, Time Line™ Practitioner , Certified Corporate Speaker, a Master Practitioner, and a Certified NLP Trainer. Martin has a keen interest in stock market trading and has personally been actively trading stocks and shares over the last few years with great success.

Martin grew up in Blackburn, Lancashire where his parents owned a successful pre-fabricated building company. When he was ready to leave school, the expectation was that he would join the family business, but he had other ideas and the pattern of his life began.

He opted for a career in management. When his parents decided to sell their business in the 70’s, they asked Martin to get involved in their new building projects in Tenerife. Again, he had other ideas and a drive to be self-made.

At 20, Martin set up a successful milk distribution business which he sold a year later when he moved to Tenerife in 1984. Here too, he established a number of successful businesses in car rental, property construction, web design and excursions companies that he built up and sold on. In 1994, he set up an estate agency company for commercial and private property, which is well established and highly successful.

He’s married to Liz and they have two wonderful children who are reaping the rewards of being exposed to such powerful tools for personal success.