Too often we want to improve our weaknesses, but it might be wiser to train our strong sides for 75 percent and our weak sides for 25 percent. Try it and you will notice that everybody is starting to feel better. That is the point where you start distinguishing yourself from other people. "Marc ...

Too often we want to improve our weaknesses, but it might be wiser to train our strong sides for 75 percent and our weak sides for 25 percent. Try it and you will notice that everybody is starting to feel better. That is the point where you start distinguishing yourself from other people.

Marc Lammers is an example of a modern coach. He is the former head coach of the Dutch women's national field hockey team. Earlier, at a relatively young age, he was the coach of the Spanish national team and a rather good hockey player himself. Marc played five international games with the national men's team. As a coach he prepared his women's team for more than 280 international matches.

During his stay in Spain he has led the Spanish team from the twentieth to the fourth place in the world ranking-list at the 2000 Sydney Olympic Games. His team won the silver medal at the 2002 World Championships after a breathtaking final that was lost after penalties. In 2003, the Dutch women's national field hockey team won the European Championships in Barcelona. The team finished second at the 2004 Olympic Games in Athens, after it lost the finals in a very exciting game against Germany. A completely new team won the Champions Trophy and the European Championships in Dublin, 2005. A year later, the Netherlands won the Champions Trophy again.

At the Olympic Games in Beijng in 2008, his team won the golden medal by beating host country China in the finals. Marc is well-known for his innovations. There was even a verb named after him: lammering.

Back in his days he already used a lot of technology in his modern-style coaching, such as video glasses, analysis software, new type of hockey sticks, heartbeat meters and earphones. All these are now pretty common, but he really was a pioneer in this field.  Marc's presentations are innovative, visual, interactive, lively and emotional. Examples derived from practical experiences provide a perfect link to other branches of industry. Coaching has changed tremendously over the last years. Marc has his own clear vision on the new developments.

It’s not just about scoring goals, but also about the road to get there. How do I motivate my people 5% more than the competitor? How do I make the difference by being one step ahead of them every time?

Just like in top sport, self-awareness of team members is crucial: everyone excels at something. Make individual strengths and weaknesses transparent, empower individuals and benefit as a team. Groups with the greatest diversity are the strongest.

Coaching today is a broad concept: modern techniques are applied and psychologists are called in to achieve progress. It involves a people-oriented approach in which team members are inspired rather than instructed.

Marc Lammers facilitated his team to independently figure out how to fight the competitor. This was not a loss of his coaching role, on the contrary. In his presentation, he discusses the great benefits of this. How do I find and use (individual) qualities?

2. "Without innovations, you will never be a champion"

Standing still is going backwards. Keep developing and innovating to stay ahead of the competitor.

3. The Modern Coach - Coaching is something you do together I innovation

Innovation in sport
Standing still is going backwards. Keep developing and innovating to stay ahead of the competitor.

Coaching is something you do together
Marc’s coaching vision revolves around inspiration, situational leadership and competence management. How do I create a performance climate?

Boundary-breaking teambuilding
Working together towards a goal only works if there is a willingness to push boundaries. Marc proved this (among other things) with the golden field hockey ladies: a very diverse group of 18 players and 8 coaches, functioning as one.

Other presentation themes around the modern coach could be: ambition, communication, goals, leadership and looking for details.

4. Where there is a crisis, there is an opportunity - Not changing is standing still

As former national coach of the golden field hockey ladies, Marc Lammers draws parallels between top sport and business: how do I distinguish myself (in difficult times)?

The conditions during the 2008 Olympic Games in Beijing were intense: heat, smog and humidity levels above 90%. According to many a crisis: how on earth can you perform in this ridiculous sports climate?

Marc thought differently, Marc saw opportunities. It was precisely under these extreme conditions that his team was able to distinguish itself: by using (among other things) ice baths, cooling vests, oxygen masks and infusions, Marc Lammers turned the crisis into an opportunity.

His field hockey ladies recovered faster and were therefore considerably fitter than their competition in Beijng. In the final they defeated the host China, resulting in Olympic Gold.

5.   "From change to improvement"
6. "From Feedback to Feedforward"

Often feedback gets bogged down in unhelpful criticism or endless discussions about things that have long since lost their influence. Feed forward looks at the possibilities based on the key question: What can be improved tomorrow?

Every organization is different; colleagues, customers, suppliers, associations or boards. Each team member has a personal goal, but certainly also a common ambition. Together, we look for the qualities of the team and look for the opportunities that will ensure that we stay one step ahead of the competition. 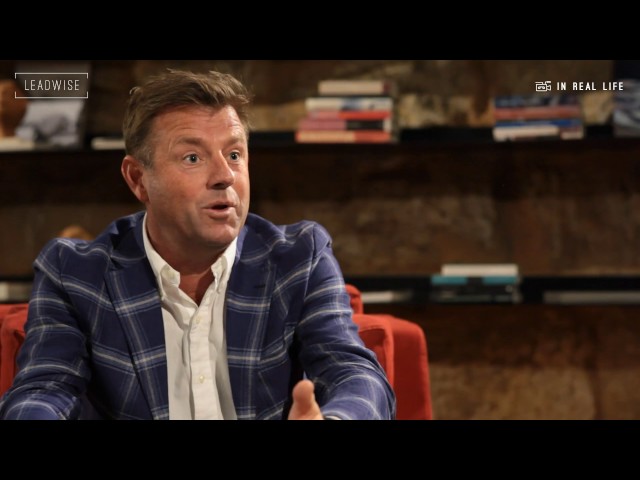 Self management in sports and business

First of all let me tell you that Marc's speech was a hit at our congress. He got the longest applause and kept the audience on its chair for the full hour. The room was packed and not only the Dutch ...

"Working with Renate has been a wonderful experience and continues to impress upon me the seemingly limitless capabilities she contains. With an open mind and heart it is a pleasure to be able to converse and discuss all potential avenues of strategy and action. The decisiveness, determination, drive and aptitude are ever present and I am truly looking forward to continuing our relationship as it unfolds to greater and greater opportunities."

What makes Marc Lammers unique as a speaker?

Marc Lammers is a former national coach of the Dutch women’s hockey team. Here he was known for his innovative way of coaching. As a speaker, Marc Lammers continues this line and likes to talk about innovation and motivation, inspiring many with his dynamic way of presenting.

What languages does Marc Lammers present in?

Marc Lammers speaks Dutch and English at meetings, but he is also fluent in Spanish. This allows Marc Lammers to make himself understood in almost every part of the world.

Can I book Marc Lammers for an online format?

Yes, absolutely! Marc Lammers offers webinars from home or from the office, with a time limit of 30 to 60 minutes. Interested? Contact Speakers Academy to discuss more details for booking Marc Lammers.

First of all let me tell you that Marc's speech was a hit at our congress. He got the longest applause and kept the audience on its chair for the full hour. The room was packed and not only the Dutch ...

First of all let me tell you that Marc's speech was a hit at our congress. He got the longest applause and kept the audience on its chair for the full hour. The room was packed and not only the Dutch crowd felt proud of having such an excellent representative of their country speaking to our global audience, but also the rest of the audience got hugely inspired. Please convey our thanks and congratulations to Marc. We noticed how much work he put into preparing his speech and making connections with the world of market research.

Many thanks for your help during these months and hopefully we will be able to work together again in the future.