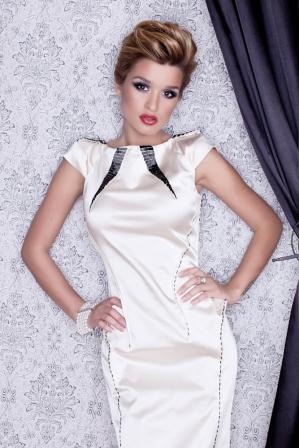 Ksenia Borodina was born on March 8, 1983 in Moscow.During study at school took a course in English educational institution «Multilingvich». After the end of the course Ksenia entered on the second year of Institute of the Hotel Management and Tourism (specialty Manager of tourism).Ksenia was ...

During study at school took a course in English educational institution «Multilingvich». After the end of the course Ksenia entered on the second year of Institute of the Hotel Management and Tourism (specialty Manager of tourism).

Ksenia was always sure that she can achieve a lot and in homeland and decided to become a TV star. She sent her resume everywhere, went to castings and auditions but it made no progress. Ksenia was upset and accepted the invitation to move to Italy. Sitting in the plane she received a phone call. She received a call from television and invited to come because she had passed a casting to new TV project.

She accepted an offer and in May of 2004 Ksenia Borodina appeared as an anchor of reality show "Dom-2" on the TNT channel for the first time. Her partner was a well-known socialite Ksenia Sobchak. TV project very quickly gained a rabid popularity both in Russia and abroad.

Ksenia became recognizable and popular - she took part in various programmes on television: «Dancing with the stars», «Cruel games», «Cosmopolitan. Video», was the main hero of the talk-show of Andrey Malakhov «Pust govoryat», etc. She became one of the most welcome guests at any secular event.

In September, 2007 Ksenia Borodina's first book «Love laws» was published. In the near time the second book followed, which is different in genre and content. It is the autobiography, in which Ksenia tells how to get on TV and become a host of the most favorite and long-term reality show of the country.

In 2008 Ksenia jointly with well-known stylist Sergey Zverev opened beauty salon. Ksenia Borodina became it is known also as the author of an effective method of weight loss and published a book «Lose weight with Ksenia Borodina».

Now Ksenia actively works on television and successfully performs on corporate events. Incredible charm, subtle sense of humor and knowledge Russian poetry allows Ksenia to fit into any format of the event organically. In the program Xenia sings the two new songs and already thinks of career of the variety performer!

In her program Ksenia performs two new songs and she is already thinking about a career of a pop singer!