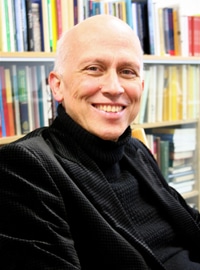 Prof. dr. Henk Barendregt studied mathematics at Utrecht University, where he received his PhD in 1971 on a thesis in lambda calculus, a topic in mathematical logic.

After a postdoctoral period at Stanford University he held tenured positions at Utrecht University and visiting positions at Darmstadt, Kyoto, Paris, Pittsburgh, Siena, Wollongong, and Zürich (ETH). His monograph "The Lambda Calculus, its Syntax and Semantics", Elsevier (1981), has been translated into both Russian and Chinese. Since 1986, he has been a professor at Nijmegen University where he presently holds the chair of Foundations of Mathematics and Computer Science. He is a member of the Academia Europaea (1992), Koninklijke Hollandsche Maatschappij der Wetenschappen (1995) and the Royal Dutch Academy of Sciences (1997). In 2002 he was knighted in the Order of the Dutch Lion. Also in 2002 he received the NWO Spinoza award, the highest scientific prize in the Netherlands.

In parallel with his activities in mathematical logic, Barendregt has been cultivating an in depth understanding of Buddhist insight (mindfulness) meditation and theoretical knowledge on the nature of the human mind, having studied Zen meditation from 1972 to 1979 under the Japanese monk Kobun Chino, and Vipassana meditation from 1979 to 2006 under the Thai monk Phra Mettavihari. Since 2001 Barendregt has been teaching insight meditation, and in 2006 he was qualified as insight teacher in the tradition of Mahasi Sayadaw. Barendregt's interests in science and meditation have led to the renewal of the Han Fortmann Center for Mindfulness at Radboud University, Nijmegen, where he has established a multidisciplinary research group dedicated to clinical, psychological and neuroscienctific research on mindfulness.

Barendregt has lectured in many countries worldwide: in Europe, North- and South-America, Australia, Asia, and recently Africa (Tunesia) on a diverse set of topics including mathematical logic and mindfulness meditation.