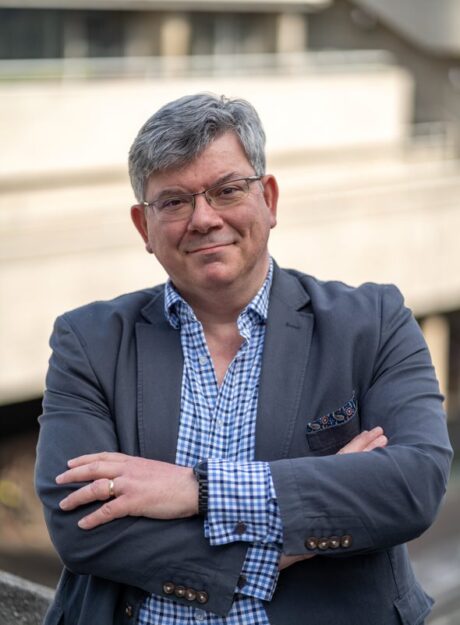 Guy Clapperton is behind the “Near Futurist” podcast and is an event MC, speaker, author and journalist who has added value to conferences spanning four continents. He focuses on technology that is going to change our lives.

Guy Clapperton is behind the “Near Futurist” podcast having been an event MC, speaker, author and journalist who has added value to conferences spanning four continents. He focuses on technology that is going to change our lives.

He started as a technology and business journalist in 1989, using early forms of social media from 1993 when he entered the freelance world. You may have seen his work in the Guardian, to which he has contributed in the mid-1990s on technology and small business; also he has written for the Financial Times, Economist Intelligence Unit, New Statesman and many other well-regarded journals.

His first book, “Free Publicity For Your Business In A Week”, came out in 2002 but it was the release of “This Is Social Media” in 2009 and the subsequent publication of “This Is Social Commerce” that took him on speaking assignments in Malaysia, Denmark, Switzerland, Sweden and Italy where he supported corporate clients. He joined the Professional Speaking Association in the UK and in late 2012 became a Fellow of that organisation. As well as speaking in his own right he is in demand as a moderator and has performed this task for Bafta and Google in the UK as well as corporate clients such as Rakuten and Mitel in Luxembourg and Holland.

In 2014 his latest book, “The Smarter Working Manifesto”, came out and took him on speaking assignments keynoting in London’s Olympia, the British Embassy in Berlin and a major corporate venue in Lisbon. He continues to coach corporate clients on speaking to the media, still writes for the Guardian, became editor of Professional Outsourcing Magazine in 2014 and has contributed regularly to the BBC News Channel as a newspaper commentator.

1.   Smarter working, better communications – forget the technology, it’s an HR issue. How and why you need to change your company culture.
2.   Hacked about – how do you get your company name and profile into the press, and how do you make this worthwhile?
3.   Social media best practice – who’s done what that’s gone well, and who’s done badly
4.   Should your brand be on social media? There’s a good chance it is already – here’s how you take part in the conversation