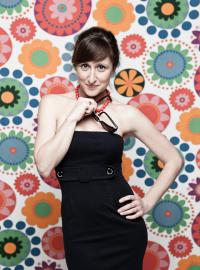 You might have heard Geraldine’s voice in commercials for Hunkemöller, Evian, Bonne Maman or Quies. She voices countless videos, multimedia products, telephone messages, apps, ringtones and...

You might have heard Geraldine’s voice in commercials for Hunkemöller, Evian, Bonne Maman or Quies. She voices countless videos, multimedia products, telephone messages, apps, ringtones and audiobooks as well in France as in Belgium, The Netherlands and the UK.

Geraldine starts her career as an actress and voice-over in Belgium at the age of 16 when she’s chosen to play in the theatrical performance to celebrate King Baudouin’s 60th birthday, staged by Frank Van Laecke. That is when she realises she will never stop acting. She takes diction, declamation and drama lessons and studies languages and history. She works with Roger Bolders, Kristiaan Lagast. Eva Bal, and André Vermaerke. She plays several parts such as Anja in “the cherry orchard” (A. Tchekhov), Beryl in “Everything for the garden” (E. Albee), Nancy in “The Night of January 16th “(Ayn Rand), Julie in “Chat en Poche” (G. Feydeau) and Maria-Magdalena in “Het evangelie volgens Judas” (Koen Stalker).

In 2000, she moves to France where she completes her training at the famous European acting school “Le Cours Florent”. After her three years there and with the “theatre family” she met, she is chosen to act in “Le Pacte”, the French adaptation of “Dark of the moon”, on the famous theatre and drama 'Festival of Avignon'. In 2008 she is directed by Eric Guerin in “Les trompettes de la mort” at the Petit Hebertot of Paris, which is well praised by the critics and the audience. Then she writes ‘La Belle au Bois de Chicago’ with Romaric Poirier. It is played during three years in Paris and on tour in France. Meanwhile she also appears in commercials, corporate videos and short movies and presents a few events as a conference hostess.

Geraldine got a bilingual education in French and Flemish and is fluent in English and German. She is also learning Portuguese. Dynamic and flexible, she easily adapts to any situation and audience and speaks with great ease.