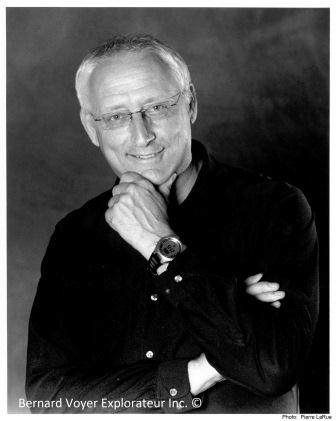 Born in 1953 in Rimouski (Quebec), Bernard Voyer has 30 years of expeditions and adventures to his credit.In 1992, Bernard skied across the four icecaps of Ellesmere Island (1 000 km), a world...

Born in 1953 in Rimouski (Quebec), Bernard Voyer has 30 years of expeditions and adventures to his credit.

Among his exploits: reaching the North Pole in 1994, and the South Pole in 1996. It took him and his companion Thierry Pétri 65 days to cover 1 500 km, each of them pulling a 170 kg load, with no outside assistance.

On December 10, 2001, he stood atop the world's coldest peak, Mount Vinson (4 897m), in Antarctica, crowning his exceptional World Tour via the highest mountain each of the seven continents.

Bernard Voyer gives a human face to an extraordinary triumph of determination. In his presentations he appeals to the audience’s imagination, but above all he succeeds in summoning forth listener's desire to excel, to prove their own courage and motivation. He is walking proof of the benefits of teamwork and co-operation, living testimony to the entrepreneurial spirit and the importance of finding in ourselves the resources we need to reach our goals. The presentations by this exceptional orator have inspired more than 250,000 people.

1. Motivation
2. Determination
3. The desire to excel
4. The benefits of teamwork
5. Environmental issues