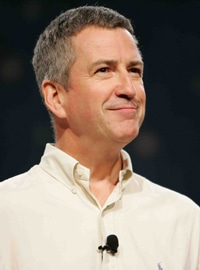 Originally from Scotland, he studied science at University before going on to fulfil a childhood ambition by becoming a successful comedian appearing regularly on radio and having his own television show. In 1986 at the age of 29 he was diagnosed with cancer. In what is best described as a wake up ...

Originally from Scotland, he studied science at University before going on to fulfil a childhood ambition by becoming a successful comedian appearing regularly on radio and having his own television show. In 1986 at the age of 29 he was diagnosed with cancer. In what is best described as a wake up call he began to realise that success is not a matter of luck but of design. Since then he has spent the last twenty years researching and continues to study the principles behind true success.

Robin set up his first company, with the sole aim of teaching people to develop themselves and reach their full potential. He firmly believes that organisational culture is a reflection of what people believe about themselves and the company they work for.

Robin is the author of the international best seller 'Natural Born Winners' (Random House), which has been sold in over 70 countries, translated into 12 languages, and also turned into a No 1 rated television series for Scottish Television. Robin's second book 'You Can Change Your Life Any Time You Want' examines the impact of how we think on our success. His third book '42 Days to Wealth Health and Happiness', was published in January 2006, and had its first reprint after 10 days, and topped Amazons best seller list.

Robin Sieger is a successful businessman, best selling author, and broadcaster with offices in the UK and the USA (Charlotte NC). Robin is a leading success strategist and developed a reputation within media and circles as a peak performance expert. He has a good reputation as a conference speaker who passionately delivers high impact presentations that are informative, inspiring and funny. Robin's humour and ability to connect emotionally with audiences has seen him become the first choice speaker at major conferences for some of the world's most successful companies, including IBM, Coca Cola, Nokia, General Motors and Microsoft at their major conferences.

In 2006 he was the first European speaker ever to be invited to speak on the main platform at the National Speakers Association Conventions 25 year history. He is passionate about enabling people to help themselves create success by connecting to their personal and professional purpose in their lives. A recognized authority on success and motivation, he is frequently interviewed in press radio and television for expert analysis or commentary.s

You Can Change Your Life