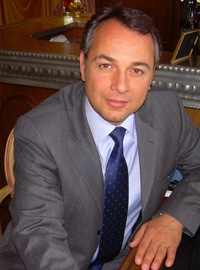 Because he accused France 2 (the French public TV channel) to have broadcast a fraudulent news report on September 30th 2000, he was sued for defamation. He finally won the case on the appeal court and it is now worldly known (except in France!) that the report that showed the death of a young Palestinian boy (Mohamed al Dura) in his fathers' arms by the Israeli army at the beginning of the 2nd Intifada was a staged hoax (please click here for more information on the case).

He now travels all over the world to publicize his legal battle and final victory. A book will be published soon about the case. A major motion picture is already prepared in Hollywood to depict the years of fight to have the truth revealed.