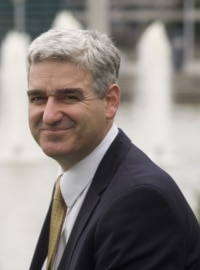 Prof. Mark Keane has been holding the Chair of Computer Science at University College Dublin since 1998, a period broken only by a secondment to Science Foundation Ireland (SFI) where he was Director of Information & Communications Technology (ICT) and interim Director General (2004-2007). At SFI, ...

Prof. Mark Keane has been holding the Chair of Computer Science at University College Dublin since 1998, a period broken only by a secondment to Science Foundation Ireland (SFI) where he was Director of Information & Communications Technology (ICT) and interim Director General (2004-2007). At SFI, he played a central role in implementing its €700M research investment in ICT and Biotechnology.

He was also a key advisor to the Irish Government during the planning of the €3.7B Strategy for Science, Technology & Innovation (SSTI), championing the Stokes Programme to create 150 posts in the third-level sector. He is currently Vice President for Innovation and Corporate Partnerships at UCD. Prof. Keane holds a BA in Pure Psychology (University College Dublin, 1982), a PhD in Cognitive Psychology (Trinity College, University of Dublin, 1987) and a free MA from Trinity College (MA j.o. 1995). His post-doctoral years were spent in Queen Mary College, University of London, the Open University and Cardiff University. In 1990, he returned to Trinity College Dublin to lecture in Computer Science.

In 1994, at the age of 33, he was made a Fellow of Trinity College. He is also a Japanese Society for the Promotion of Science Fellow (1998) and an ECCAI Fellow (2004), one of only 100 European Artificial Intelligence researchers to be honoured in this way. In 1998, he became Chair and Head of the Department of Computer Science at University College Dublin where he oversaw a major expansion of the department. Between 1998-2001 the department achieved a 5-fold increase in research funding, a 7-fold increase in postgraduates and a 40% increase in undergraduate numbers.

In 2006, the department became the School of Computer Science & Informatics. Prof. Keane has made research contributions in Cognitive Science and Computer Science in the areas of human creativity, figurative language understanding, discovery systems, case-based reasoning and human-computer interaction. He has written over 130 refereed publications including 20 books. According to GoogleScholar, his highest cited work has 660 citations. He has personally won over €3M in research funding and, in 2003, led the Adaptive Information Processing Cluster that received €7M in funding from SFI. He is co-author of a leading textbook in Cognitive Science that has sold over 1/2 million copies worldwide and has been translated into 5 languages.