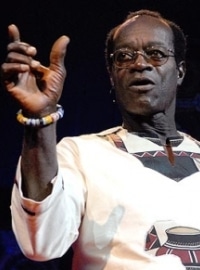 George Ayittey was born in Ghana, West Africa, where he obtained all his primary education and his B.Sc. (Economics) from the University of Ghana, Legon, in 1966. He left Ghana for Canada to pursue his postgraduate studies at the University of Western Ontario. George was awarded his M.A. ...

In 1988, he accepted a National Fellowship at the Hoover Institution, Stanford University in California. He was one of 13 professors selected across the US in recognition for their outstanding scholarly work. He left Hoover in 1989 to join the Heritage Foundation as a Bradley Resident Scholar — one of 5 professors chosen across the US for the 1989-1990 academic year. Among other scholarships and grants he has received, include a Summer Fellowship at Institute of Public Choice (George Mason University) in 1988, Earhart Foundation grants in 1988 and 1989, and a grant from the International Freedom Foundation. Since 1990, he has been a Visiting Associate Professor of Economics at The American University. In 1993, he started The Free Africa Foundation in Washington, DC, to serve as a catalyst for reform in Africa.

He has written numerous articles on Africa and the Third World, which have appeared in such publications as The Wall Street Journal, Globe and Mail (Canada), The Times of London, USA TODAY, The CATO Journal, World Development, Humane Studies Review, Journal of Defense and Diplomacy, Journal of Economic Affairs, Journal of Economic Growth, The World & I, Crisis, and Foreign Trade Review. Many of his articles have been syndicated for worldwide distribution and some have been reprinted in Reader's Digest, International Herald and Tribune, Jeune Afrique Economie, and papers in Africa — recently in The Sowetan (South Africa) and Daily Observer (The Gambia). I have been cited in the American Economic Review, The New York Times, Scientific American, and by Paul Harvey, William Raspberry and others.

George has also appeared on several radio talk shows, and TV programs (Canada AM, CBS "Nightwatch," ABC "Nightline," Christian Science Monitor TV, MacNeil/Lehrer NewsHour, C-SPAN, and CNN "Crossfire" with Rev. Jesse Jackson). He has been interviewed often on National Public Radio, VOICE OF AMERICA, and BBC World Service. In 1985, he was selected as one of the Outstanding Young Men of America and in 1987 he was nominated for the AFRICA PRIZE FOR LEADERSHIP by The Times of London. He is also featured in a TV documentary on Africa, "Burden On The Land" (1990, Roger Pyke Productions of Toronto).

George has testified before US Congressional committees about the Third World Debt Crisis (Feb, 1987), Foreign Aid to Africa (Nov, 1991, Feb 23, 1993) and South Africa (March, 1992). He has served as a consultant to several organizations, including the World Bank, US AID, and International Council on Metals and the Environment (ICME). He has given lectures to various organizations, institutions and universities, including the National Bar Association, the International Monetary Fund (IMF), the US State Department, US Foreign Service, and the United Nations Development Program (UNDP). George was invited by the White House (Dec, 1990) to commemorate the signing of a Human Rights Proclamation by President Bush.

Prof. dr. George Ayittey was invited by the IMF to participate in a high-level event in Sept 2010.

1.   Africa
2.   Economical situations in Africa
3.   Why Adjustment Failed in Africa
4.   Why Africa Is Poor
5.   The Making of Modern West Africa