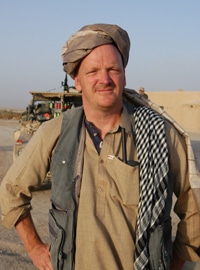 Arnold Karskens, considered by many to be the only true Dutch war correspondent, belongs to a select group of journalists traveling to conflict areas where nobody else wants to be. He is courageous,...

Arnold Karskens, considered by many to be the only true Dutch war correspondent, belongs to a select group of journalists traveling to conflict areas where nobody else wants to be. He is courageous, knows how to handle challenges and has perseverance. Skills that have practical value in everyday life as well. Survival is an art, in times of war and peace.

Karskens uses his experience to answer questions like 'how do I increase my mindpower to be able to carry out a difficult assignment?' or 'how do I take a crucial decision in a split second?' He teaches people how to stay motivated under extreme circumstances. In his captivating, slightly ironic style he unveals the secret why some people are courageous and others are not. He teaches you how to become courageous. He shows which mechanisms are important in times of adversity and danger. He outlines how to master the factors that influence 'luck' and how to keep things well-organised in times of complete chaos and danger. Karskens tells you which insights you need to plan things, when there seems to be nothing to plan. Survival at the edge! After his pep talk there is no fear left.

Karskens has written five books. In his autobiography 'Messages from the front' ('Berichten van het front') he explains why he decided to challenge danger and how he conquered numerous obstacles on his way to war. In 'Plasters on the eyes - plaster on the mouth' ('Pleisters op de ogen - pleister) Karskens describes the history of Dutch war journalism and what we should learn from the past. His survival handbook 'Traveling along the front line' ('Reizen langs e frontlinie') is a real 'live-saver' for tourists and business people who travel to dangerous areas and the trenches of modern times. Karskens shows endurance in his last book 'No regrets at all' ('Geen cent spijt'). It is the story about his hunt for Frans van Anraat, the biggest Dutch war criminal ever. For fifteen years, Karskens only had one goal: putting van Anraat behind bars.

The last 25 years, Dutch newspapers, magazines and broadcasters have sent Karskens to war zones in El Salvador, Suriname, Angola, Rwanda, Eritrea, Algeria, Bosnia, Chechnya, Iraq and Afghanistan. In the spring of 2003, he reported on the Third Golf War for SBS 6-tv, Barend & Van Dorp (talk show), VRT News and Nieuwe Revu Magazine. Currently Karskens is one of the few war reporters to cover the wars in Afghanistan and Iraq unembeddedly. Speaking of guts!