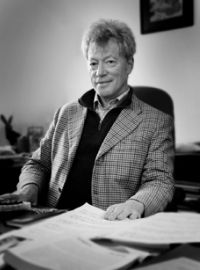 Roger Scruton is currently Research Professor for the Institute for the Psychological Sciences where he teaches philosophy at their graduate school in both Washington and Oxford.He is a writer,...

Roger Scruton is currently Research Professor for the Institute for the Psychological Sciences where he teaches philosophy at their graduate school in both Washington and Oxford.

He is a writer, philosopher and public commentator. He has specialised in aesthetics with particular attention to music and architecture. He engages in contemporary political and cultural debates from the standpoint of a conservative thinker and is well known as a powerful polemicist. He has written widely in the press on political and cultural issues.

Roger Scruton’s most recent books are England: an Elegy (Continuum, Books, 2000), an attempt to give identity to the idea of England and a tribute to its values and institutions; Death-Devoted Heart: Sex and the Sacred in Wagner's Tristan and Isolde (Oxford University Press, 2003), an analysis of the musical and spiritual meaning of Wagner’s work; News from Somewhere: On Settling (Continuum Books, 2003), an evocative account of the author’s attempt to put down roots in rural Wiltshire; A Political Philosophy (Continuum Books, 2006), a thoughtful response to the development and decline of western civilization, The West and the Rest (ISI Books, 2001), an analysis of the values held by the ‘West’ and how they are distinct from those held by other cultures. Gentle Regrets (Continuum, 2006) and On Hunting (Random House, 1998) are two autobiographical works. 2007 sees the publication of Culture Counts: Faith and Healing in a World besieged (Encounter Books 2007) and a third edition of A Dictionary of Political Thought (Palgrave Macmillan, 2007) which provides a concise and comprehensive collection of definitions for political thought and processes.