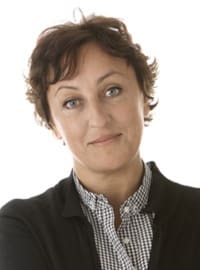 After graduating in Staff Management, Karin Bruers started a career outside the Netherlands. She traveled around the world for ten years and learned how to understand different audiences and...

After graduating in Staff Management, Karin Bruers started a career outside the Netherlands. She traveled around the world for ten years and learned how to understand different audiences and cultures. Back in the Netherlands, she started her own creative agency, specialised in policy-supporting entertainment for enterprises.

She started off as an actress in two regional television sitcoms and hosted her own talkshow on a television station in the Dutch province of Brabant. She played for two consecutive years at the Parade Festival and has been Master of Ceremonies in stand-up comedy and cabaret shows since 1999. She hosted Cabarestafette and the Leiden Cabaret Festival.

Karin is also very active behind the scenes. She wrote and directed a humorous sketch show for national broadcaster KRO. She produced various sketches for 'Ook dat nog', a satirical consumer show. In October 2004, Karin Bruers toured the Netherlands for the first time. 'Bruers III' is her first solo show. The title refers to three generations of Bruers-women, who have proven that life without men is easy. Karin likes to attack role patterns. She approaches Big Questions with humour and common sense and comes up with extremingly surprising answers or solutions. Karin is a very politically and socially engaged woman. She frequently leads political debates and events. Karin supports the charities she believes in. Her work never is inconsistent with her ideas. She expresses herself in a sharp and clear manner and she is always able to find the perfect balance between seriousness and humour. Her performances are never dull, laughter does not affect serious themes. On the contrary.

Karin is a multi-task woman. She customises cabaret, she is an experienced chairwoman and debate leader, she is able to host various kinds of events. Karin is fluent in Spanish, French, English, German and Dutch, which makes her the ideal person to host international events. Karin has developed a lecture on successful networking for corporate audiences. She is convinced networking is not a corporate thing, but normal social behaviour. We are all networking. A child who wants to be invited to a birthday party will try to become a friend first. A house wife who does not want to drink her daily glass of sherry alone, will clean her windows at the same time her neighbour does. There are two kinds of networking; successful and prospectless. During a 30 minute humorous workshop comedian Karin Bruers provides her audience with essential tools for successful networking. Without mercy she separates the networkers from the notworkers. The conceptual model on which her networking theory is based, is simple and effective at the same time. Even a die-hard wall flower changes into a networkwonder within those 30 minutes. And Karin? She moves on to another room full of hopeful potential networkers. There is enough left to be done.