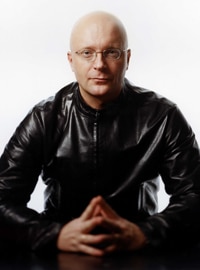 Dr. Jonas Ridderstråle is at the forefront of the new generation of European-based business gurus. He cuts through the madness and hyperbole surrounding the global economy with a truly global appeal. His uncompromising, imaginative and decidedly fresh take on contemporary business life makes him ...

Dr. Jonas Ridderstråle is at the forefront of the new generation of European-based business gurus. He cuts through the madness and hyperbole surrounding the global economy with a truly global appeal. His uncompromising, imaginative and decidedly fresh take on contemporary business life makes him one of the world’s most sought after and appreciated speakers. The 2007 Thinkers 50, the world’s first ranking of management thinkers, ranked Ridderstråle and his partner Dr. Kjell A. Nordström at number thirteen in the world.

Forget dry theories, Ridderstråles ideas work. He makes things happen. Ridderstråle acts as an advisor and consultant to a number of multinational corporations and runs his own Business Improvement Group.

Dr. Ridderstråle holds an MBA and a PhD in international business and has been recognized as Sweden’s outstanding young academic of the year. Formerly, he was an assistant professor at the Stockholm School of Economics where he was responsible for the school’s Advanced Management Program - a five week top-management program that attracts the elite of Scandinavian executives. Ridderstråle is currently a visiting professor at Ashridge Business School in the UK. His research focuses on new organizational models and leadership styles in the information age and has been published in leading academic journals, including Business Strategy Review, Organization Science and CritcalEYE Magazine. Ridderstråle contributed to the best-selling Financial Times Handbook of Management and Business: The Ultimate Resource. He is on the editorial board of The Capstone Business Encyclopaedia.

Ridderstråle is the author of three business books together with Kjell A. Nordström. His latest book, Funky Business Forever, the long awaited update to the international bestseller. Funky Business Forever takes a look back on the later half of the millenniums first decade and provides evolved thinking and commentary in a way that is truly funky and down to business.

The previous book Karaoke Capitalism: Management for Mankind is a globally celebrated manifesto on how to make it in the new world of commerce. Individuals with endless choice dominate the karaoke economy. The trouble for business is that the karaoke club is also home to institutionalized imitation. Copycats abound.

The first book, Funky Business: Talent makes capital dance quickly became an international bestseller, selling more than 300,000 copies. The book was recently ranked at number 16 in a Bloomsbury survey of the best business books of all time.

Jonas Ridderstråle has attained tremendous media coverage throughout the world. In March 2004, he appeared on CNN's program 'Global Office' for a long interview on the ideas behind the books. Dr. Ridderstråle has also been featured in Fortune, Fast Company, Time Magazine, Financial Times, Stern, Paris Match, and many other publications worldwide.