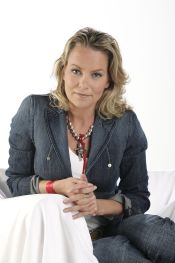 'Connect hearts of people. Inspire to make a difference.'

Rebecca Bijker is a personality in the media in the field of charity and development work. Since 2000 she has been hosting various tv-shows, charity programs, documentaries, children’s programs and medical programs on the Dutch channels one, two and three. Along with presenting she has always ...

Rebecca Bijker is a personality in the media in the field of charity and development work. Since 2000 she has been hosting various tv-shows, charity programs, documentaries, children’s programs and medical programs on the Dutch channels one, two and three. Along with presenting she has always been involved in directing and producing and she has made various very impressive TV-items and documentaries. Besides television work Rebecca Bijker has always been very active in charity work amongst children in South East Asia.

After finishing high school Rebecca took off to the Philippines to work on the Smokey Mountains at a emergency clinic for children. Here she made several very impressive documentaries about the shocking situation in which poor people live. Back in the Netherlands she studied journalism for a year and then moved to the United States to study child education, anthropology and mass-communication. After getting her degree she taught children in Hawaii and Hong Kong for 2 two years before starting her television career. In 1999 she hosted her first live-children’s show Mir@kel. Her career took off from her as she became the face of numerous of children’s and charity TV-programs like Blinq, Nederland Helpt, Love Match, Eerste Hulp Asia, Afslag UMC and the Helpende Hollander Award 2006 and 2007.

Meanwhile her involvement in charity continued as she founded Are & Bee connections in 1999. With this foundation she coordinates enthusiastic volunteers that work for development projects. Her main project is Home of Hope, a children’s home in Sri Lanka that provides a home for 80 kids affected by the civil war.

Nowadays Rebecca Bijker runs her own production company Make Sense TV which focuses on TV-productions and on hosting and presenting events. Besides that Rebecca puts a lot of time and passion in the Home of Hope project in Sri Lanka and in the development of child education as the ambassador for Edukans.

Motivating, stimulating and encouraging people is Rebecca Bijkers second nature and with her presentation skills she can communicate this in a professional way.