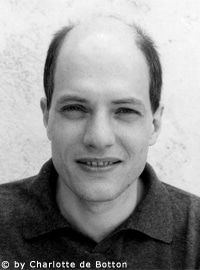 Philosophy of everyday life and authority on Proust

He is a writer of essayistic books, which refer both to his own experiences and ideas - and those of artists, philosophers and thinkers. It's a style of writing that has been termed a 'philosophy of...

He is a writer of essayistic books, which refer both to his own experiences and ideas - and those of artists, philosophers and thinkers. It's a style of writing that has been termed a 'philosophy of everyday life.'

His first book, 'Essays in Love' [titled 'On Love' in the US], minutely analysed the process of falling in and out of love. The style of the book was unusual, because it mixed elements of a novel together with reflections and analyses normally found in a piece of non-fiction. It's a book of which many readers are still fondest.

It was with 'How Proust can change your Life' that de Botton's work reached an international audience. The book was a particular success in the United States, where the mixture of an ironic 'self-help' envelope and an analysis of one of the most revered but unread books in the Western canon struck a chord. It was followed by 'The Consolations of Philosophy', to which it was in many ways an accompaniment. Though sometimes described as works of popularisation, these two books were at heart attempts to develop original ideas (about, for example, friendship, art, envy, desire and inadequacy) with the help of the thoughts from other thinkers. This approach would have been familiar to writers like Seneca or Montaigne, disappearing only with the growing professionalization of scholarship in the 19th century.

De Botton then returned to a more lyrical, personal style of writing. In 'The Art of Travel', he looked at themes in the psychology of travel: how we imagine places before we have seen them, how we remember beautiful things, what happens to us when we look at deserts, or stay in hotels or go to the countryside. In 'Status Anxiety', he examined an almost universal anxiety that is rarely mentioned directly: the anxiety about what others think of us; about whether we're judged a success or a failure, a winner or a loser.

De Botton's latest book, The 'Architecture of Happiness', discusses questions of beauty and ugliness in architecture. Much of the book was written at de Botton's home in West London, just near Shepherd's Bush roundabout, one of the uglier man-made places, which nevertheless provided helpful examples of how important it is to get architecture right.

Aside from writing, de Botton has been involved in making a number of television documentaries - and now helps to run a production company, Seneca Productions.

He has also just helped to launch a miniature 'university' called The School of Life - which emulates the spirit of enquiry and playfulness found in his books.

1. Philosophy of everyday life
2. Proust
3. The process of love
4. The Consolations of Philosophy
5. The psychology of travel
6. Architecture (of Happiness)

How Proust Can Change Your Life

The Consolations of Philosophy

The Art of Travel

The Architecture of Happiness