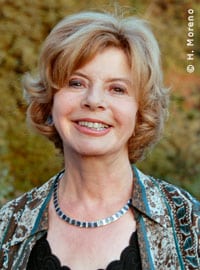 Professor Michèle Sarde has specialized in gender studies, intercultural studies, and 20th century French Literature and Culture. She has written biographies (Colette and Marguerite Yourcenar), essays (particularly on Women in France), and novels. Her most recent publication: De l’Alcôve à ...

Agrégée de lettres modernes (Université de Paris Sorbonne), she began her academic career at Georgetown University, in Washington, D.C., in 1970, combining teaching, literary and cultural research, and creative writing. Like many French intellectuals residing in the United States, she contributed to the promotion of her own culture and to international cultural exchange in general. In 1989, Professor Sarde was co-director of the Conference on Communication and the Media in Contemporary French culture, which was held during the Georgetown University Bicentennial.

In 2001 she left university teaching to devote herself to literary pursuits, while still maintaining a close relationship with Georgetown University as Professor Emerita. As an essayist, biographer, and novelist, Michèle Sarde has concentrated a major part of her work on women. She was nominated in 1991 for the Prix Goncourt for her novel Histoire d'Eurydice pendant la remontée. Other honors and awards include the Prix de l'Académie Française (Fondation Biguet) and the Prix de l’Académie des Science Morales et Politiques (Fondation Marcelle Blum) for Regard sur les Françaises, and in 2006 the prestigious Ordre National du Mérite, awarded by the French government.