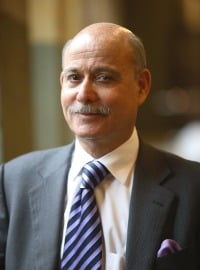 Mr. Transatlantic: explaining the EU dream to Europe, the US and the business world

Jeremy Rifkin is president of the Foundation on Economic Trends and the author of seventeen best-selling books on the impact of scientific, technological, and cultural changes on the economy, the...

Jeremy Rifkin is president of the Foundation on Economic Trends and the author of seventeen best-selling books on the impact of scientific, technological, and cultural changes on the economy, the workforce, society, and the environment. His books have been translated into more than thirty languages and are used in hundreds of universities, corporations and government agencies around the world. His most recent books include The Hydrogen Economy, The European Dream, The End of Work, The Age of Access, and The Biotech Century. Mr. Rifkin is serving as a senior consultant to the current President of the European Union, on issues related to the economy, climate change, and energy security.

He also serves as an advisor to the European Commission, the European Parliament, and several EU heads of state, including President Jose Rodriguez Zapatero of Spain and Prime Minister Romano Prodi of Italy. Jeremy Rifkin truly is the transatlantic voice of our time, understanding and explaining the 21st century dynamics and trends at work in the economies on both sides of the atlantic. Explaining the EU to both the USA and to Europe itself.

Bringing understanding by explaining the opposite sides of the Atlantic to each other in a changed, and globalised world, was never going to be easy. But because of his 20 years of experience with both the world of Business and Government, Jeremy Rifkin makes the complex simple, and after following a lecture by Jeremy one feels one has gained invaluable insights into the future of the great twins of the world economy: Europe and America.

As an american Rifkin has been influential in shaping public policy in the United States and around the world. He has testified before numerous congressional committees and has had consistent success in litigation to ensure responsible government policies on a variety of environmental, scientific and technology related issues. He has been a frequent guest on numerous television programs, including Face the Nation, The Lehrer News Hour, 20/20, Larry King Live, Today, and Good Morning America. The National Journal named Rifkin as one of 150 people in the U.S. that have the most influence in shaping federal government policy.

Mr. Rifkin has been a fellow at the Wharton School's Executive Education Program since 1994, where he lectures to CEOs and senior corporate management from around the world on new trends in science and technology and their impacts on the global economy, society and the environment.

Mr. Rifkin's monthly column on global issues appears in many of the world's leading newspapers and magazines, including The Los Angeles Times in the United States The Guardian in the U.K., Die Süddeutsche Zeitung and Handelsblatt in Germany, Le Soir and Knack in Belgium, L'Espresso in Italy, El País in Spain, Informatíon in Denmark, De Volkskrant in the Netherlands, Hospodárské Noviny in the Czech Republic, Wort in Luxembourg, Eesti Päevaleht in Estonia, Trud in Bulgaria, Clarín in Argentina, and Al-Ittihad in the U.A.E.. His global appeal can be attributed to his unique message, which people feel fills a void in our understanding of current affairs. It is also his eloquence and enlightening insights.

Mr. Rifkin holds a degree in economics from the Wharton School of the University of Pennsylvania, and a degree in international affairs from the Fletcher School of Law and Diplomacy at Tufts University. Rifkin speaks frequently before government, business, labor and civic forums. He has lectured at hundreds of the world’s leading corporations as well as more than 200 universities in some 30 countries in the past 30 years.