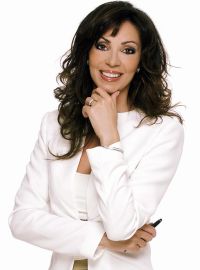 Elizabeth Filippouli works for the global TV network Al Jazeera International as a Presenter and Correspondent. She presents flagship Programs of the network, like Witness and People & Power and she works on her own stories and documentaries. One of her recent works was 'A King without a Country', ...

Elizabeth Filippouli works for the global TV network Al Jazeera International as a Presenter and Correspondent. She presents flagship Programs of the network, like Witness and People & Power and she works on her own stories and documentaries. One of her recent works was 'A King without a Country', a half-hour documentary featuring the life of King Constantine of Greece. Her upcoming four-part series on 'Muslims in Europe' is scheduled to air in June.She travels the world to pursue and investigate intriguing stories and personalities. In February 2004 she was allowed to attend and record the preaching of the radical Muslim Imam Bin Bakri Mohammad, who is considered as the 'right hand of Osama Bin Laden in Europe'. In April 2006, she visited the biggest and one of the last leper colonies of the world, in Egypt.Before Al Jazeera International, she had been working for the Hellenic Broadcasting Corporation (ERT) for fourteen years as a news presenter and feature shows presenter and producer. She specializes in international affairs and interviews. Apart from thousands of daily news bulletins she has produced and presented a significant number of live current affairs programs for ERT, latest one (2004-2005) being the weekly show 'Colours of Iris', focusing on international and domestic political/social issues.Before and during the Olympic Games in Athens, in 2004, she produced and presented ERT's two main Olympic shows 'The Journey of the Olympic Flame' and also 'Rendezvous in Athens'.In August 2005, she was appointed to produce and host the EUROVISION SONG CONTEST shows; an honorary appointment as Athens was organizing the ESC in May 2006. In October 2005 she covered live from Copenhagen the 50 years Eurovision anniversary show 'Congratulations'.Since 1999, and for seven years, she was a CNN International contributor, regularly reporting for CNN on Greek affairs and breaking news in Greece (Destructive earthquake in Athens (1999), Kranidiotis killed in plane accident (1999), Snowstorm covering Athens (2001), Russian tycoon's arrest (2003), Olympic Games (2004), Bus hijacking (2004), etc.).In May 2003 her special report for CNN on 'Gypsies in Athens' was a nominee for CNN's annual award for Best Reports.She has started her career sixteen years ago working as a journalist in newspapers and magazines in Greece. She also worked for the ATHENS 9,84 radio, focusing on international media issues.She regularly attends International Media Conferences as a speaker or panel moderator (CNN WR Conference, NewsXchange, NewsWorld, Eurasian Media Forum, and Economist Conferences). In June 2002, she was a member of the jury for the News & Documentaries EMMY Awards in Europe.She is also professionally involved in organizing and delivering Media Training and Crisis Management courses for major corporations.In 1999 and 2000, she attended two high-level Professional Programs organized by CNN in Atlanta, US, and the Reuters Foundation in London, UK, including a Centurion Risk Assessment Course on surviving in conflict zones.She has got a Bachelor's Degree in German Literature from Kapodistriakon University of Athens. She has also studied Political Science and International Relations at Pandeion University of Athens.Her book on current international affairs under the title 'The Invisible Reality', launched in the Greek bookstores in December 2005.