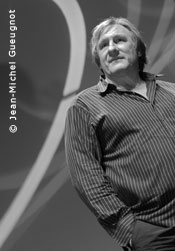 Gérard Depardieu is an actor, director, producer and businessmen. He is one of the best European and French actors the movie and film business has to offer. He received of many prestigious awards an ...

Gérard Depardieu is an actor, director, producer and businessmen. He is one of the best European and French actors the movie and film business has to offer. He received of many prestigious awards an actor can receive (a Golden Globe, an Oscar, multiple César awards) and received two times a Chevalier de legion dhonneur (Ordre national du Mérite and Légion d'honneur) from the French government for his outstanding work and contribution to France. He starred in over 100 movies.Gérard Depardieu was born in ChI¢teauroux, Indre, France. He is one of six children of Anne Jeanne Josèphe and René Maxime Lionel Depardieu. Depardieu spent more time in the street than in the classroom and left school at 13. At the age of 16, Depardieu left ChI¢teauroux for Paris. There, he studied acting under Jean-Laurent Cochet, and went on to become one of France's most renowned actors. In 1986, his fame grew as a result of his performance as a doomed, hunchbacked farmer in the film Jean de Florette. Five years later he won a César for his starring role in Cyrano de Bergerac. More recently, he has played Obélix in the three Astérix movies.In 1970 Depardieu married I‰lisabeth Guignot with whom he had two children, actor Guillaume (1971”“2008) and actress Julie (1973). In 1992, while separated from I‰lisabeth, he had a daughter, Roxane, with the model Karine Sylla. In 1996 he divorced I‰lisabeth and began a relationship with actress Carole Bouquet, with whom he was married from 1997 to 2005. Since 2005, Depardieu has lived with a Harvard-educated novelist, Clémentine Igou.