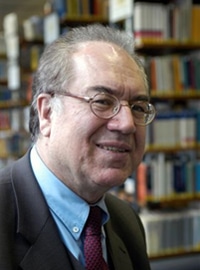 Prof. dr. Bassam Tibi is Professor of International Relations in Goettingen parallel to his position as a non-resident A.D. White Professor at Large at Cornell University. He was born in Damascus on 4 April 1944 and descends from the centuries old family Banu al-Tibi of Damascene nobility (ashraf). ...

Prof. dr. Bassam Tibi is Professor of International Relations in Goettingen parallel to his position as a non-resident A.D. White Professor at Large at Cornell University. He was born in Damascus on 4 April 1944 and descends from the centuries old family Banu al-Tibi of Damascene nobility (ashraf). In Damascus he was educated in Islamic and Western schools until he completed his high school education there with the French Baccalaureat. In 1962 he moved to Germany to study Social Science, Philosophy and History. His training was at the Wolfgang von Goethe University of Frankfurt.a.M. where he received his first Ph.D. in 1971. Among his academic teachers (Frankfurt School) were Max Horkheimer and Theodor W. Adorno, Jürgen Habermas and Iring Fetscher. Tibi received his Dr. habil. (German Super PhD) from the University of Hamburg.

Tibi’s academic career began at the universities of Frankfurt and Heidelberg 1970 - 1973. Hereafter, Dr. Tibi was then appointed 1973 as Professor for International Relations at the University of Goettingen. In 1988 he was appointed Professor of Comparative Politics as successor of Stein Rokkan at the University of Bergen/Norway by a Royal resolution of King Olav IV. After the decision to accept the honor but to decline the offer by staying in Goettingen, funds were provided for establishing the Center of International Affairs of which Professor Tibi has been the Director ever since. At this center he established Islamology as a study of Islam and conflict in society and in international politics.

Between 1982 and 2007 Prof. Tibi established global networks for teaching and research in Islamology. He started this 1982 at Harvard. In this context he has earned his research reputation through his books worldwide. He held 18 visiting professorships, inter alia, in the United States (Harvard, Princeton, Berkeley, Ann Arbor), Turkey, Sudan, Cameroun, and recently in Switzerland, Indonesia and Singapore. Since July 2004 he holds the visiting A.D. White Professorship-at-Large, Cornell University, USA and since that year he teaches classes at the Diplomatic Academy in Vienna. On leave from Goettingen and Cornell he spent his last sabbatical in the academic year 2004/05 first as a Visiting Scholar returning to Harvard University and then as a Senior Research Fellow at the Asia Research Center/National University of Singapore. The major visiting appointment among the numerous ones was between 1982 and 2000 at Harvard, where Prof. Tibi was affiliated in a variety of capacities, the latest of which as The Harvard Bosch Fellow 1998-2000 at the Weatherhead Center for International Affairs. Several books were completed there and two of them published in association with Harvard University. His most recent senior fellowship is a the Center for Advanced Holocaust Studies in Spring 2008 in Washington DC.

Prof. Tibi lectured worldwide at least in thirty universities in five continents including all Ivy League universities in the US in addition to Stanford, UC Berkeley and UC Los Angeles, and various universities in the Middle East, West and East Africa, South and Southeast Asia as well as in Australia. Between 1999 and 2001 he was among the Fellows of The World Economic Forum in Davos.

The work of Prof. Tibi is published in 16 languages. The core of these publications are 27 books in German (translated in 16 languages) and further seven books written in English. His work deals with Islamic civilization, the Middle East, the Mediterranian region, and with Islamic migration to Europe as well as with jihadism and the religious fundamentalism of political Islam. Additionally, Bassam Tibi has been the co-author of various books that grew from research projects. Between 1968 and 2008, his articles and essays were published in leading journals such as International Journal of Middle Eastern Studies, Millenium, The Fletcher Forum of World Affairs, Religion-Staat-Gesellschaft, Human Rights Quarterly, Middle East Journal, Totalitarian Movements and Political Religions, Theoria, and The Current. Encyclopedias such as The Oxford Encyclopedia of Modern Islam, Routledge Encyclopedia of Government and Politics, Encyclopedia of Democracy and Encyclopedia of Non-Violent Action also include Tibi’s articles. He is a consulting editor of Totalitarian Movements and Political Religions and of Theoria and is in the Advisory Board of The International Journal of Humanities, and of Religion-Staat-Gesellschaft.

Among his books published and written in English are The Challenge of Fundamentalism (California University Press, updated edition 2002) Islam Between Culture and Politics (Palgrave, expanded new edition 2005, with an added part dealing with the world political context of 9/11), next to the classic on Arab Nationalism, Between Islam and the Nation State, published in a third edition 1997. His most recent book is Political Islam, World Politics and Europe: Democratic Peace and Euro-Islam versus Global Jihad (Routledge 2008) was completed between Jakarta/Indonesia and Cornell/USA between 2003-07 and it documents the ripe accomplishment of his work.

Professor Tibi is board member of many significant institutions and the recipient of many prizes. The then President of Germany, Roman Herzog, awarded him in 1995 the “Bundesverdienstkreuz” First Class, the highest Medal of the State for his accomplishments. In 2003 he received in Zurich the annual prize of the Swiss Foundation for European Awareness. He is also board member of CIVIS Foundation of the German ARD television and was earlier on the board of the Bosch Foundation, as well as a member of the Goethe-Institute Assembly for five years. He is a frequent contributor to German media and newspapers.