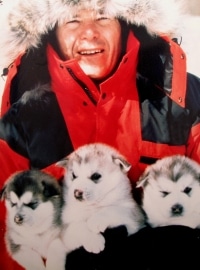 Will Steger is a recognized authority for the Polar Regions, including their environmental issues, and is an eyewitness to the effects of global warming. He has spent more than 45 years traveling...

Will Steger is a recognized authority for the Polar Regions, including their environmental issues, and is an eyewitness to the effects of global warming. He has spent more than 45 years traveling through the Arctic regions, advocating for the Earth's preservation and advising about permanent solutions to our climate crisis.

Steger holds a Bachelor of Science in geology, Master of Arts in education and Honorary Doctorate from University of St. Thomas, St. Paul, Minn., in addition to Honorary Doctorates from Westminster College, Northland College and Franklin Pierce University.

As an educator, Steger taught science for three years at the secondary level. He founded a winter school and developed an innovative wilderness program in Ely, Minn. Steger also established the Global Center for Environmental Education at Hamline University, St. Paul, Minn., and the World School for Adventure Learning at University of St. Thomas.

With his ability to blend extreme exploration and cutting-edge technology, Steger pioneered online education during his 1995 expedition — reaching more than 20 million students via online daily journals and delivering the first-ever transmission of digital photography from the North Pole.

Steger has been invited to testify before the United States Congress and has advised world leaders on the environmental protection of Antarctica.

In 2006, the legendary explorer established the Will Steger Foundation to promote change through education and advocacy, and to foster international leadership and cooperation through environmental education and policy.

The Foundation's Global Warming 101 initiative engages and empowers individuals and policy makers to translate their climate concern into action.

Over the Top of the World

Enthusiastic about Will Steger?