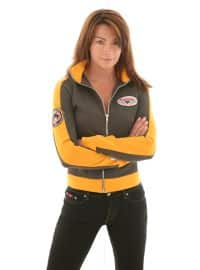 Enthusiasm and intelligence are just two of the gifts that Suzi brings to her work as one of the best live presenters on our screens. She is currently the only female presenter on TV with an encyclopedic knowledge of her given specialty: Motorcycling. Her skills were honed at Sky Sports, covering ...

Enthusiasm and intelligence are just two of the gifts that Suzi brings to her work as one of the best live presenters on our screens. She is currently the only female presenter on TV with an encyclopedic knowledge of her given specialty: Motorcycling. Her skills were honed at Sky Sports, covering both the smaller bikes in Speedway and their larger brothers in the Grand Prix series and World Super Bikes. In 1999 Suzi moved across to the BBC and Grandstand. She is the BBC’s face of motorcycling and presents a live 30 minute preview for each MOTOGP race from the pit lane.

Within the Grandstand team she has used her live presentational skills reporting from events such as Wimbledon, The Boat Race, The London Marathon, The Great North Run, and sailing at the Athens Olympics. January 2006 Suzi co-presented the ITV 1’s coverage from The London Boat Show held at Excel in Docklands .2004 and 2005 saw Suzi exchange her biking leathers for the more formal glamour of Ascot, looking and commentating on the fashion at Royal Ascot and in 2005 from York, Royal Ascot’s temporary home.

Motor bikes represent only a part of her TV work; who will ever forget her amazing challenge she undertook during the Summer of 2006 on behalf of Sport Relief. Suzie learnt to first ride and then showjump all from scratch in just three weeks to enable her to compete in BBC1’s ‘Only Fools on Horses’ she has co-presented with Johnny Vaughan on two series of the iconic 80’s programme ‘Superstars’ tx BBC1 (where sporting legends take on new roles to compete for the coveted Superstars trophy). She also had a great deal of fun taking up the role of the lycra-clad, helicopter-hopping skyrunner for the new version of ‘Treasure Hunt’ both in the UK and its International version.

She has presented four series of ‘City Hospital’ BBC1 a live daytime show set at Southampton General Hospital and four series of ‘Housecall’ a live daytime home styling show. She presented a strand for ‘Watchdog Health check’, reporting on Men’s Health Issues. There was also a stint as a roving reporter for the ‘On the Spot’ Lottery Show with Des O’Connor. In 2002 she co-presented a Christmas Day special with Jim Davidson ‘Homeward Bound for Christmas’ onboard HMS Invincible.

Recently Suzi has bought her many and varied talents to the world of Gadgets and Gizmos. This started with a series for Discovery Channel called ‘What’s The Big Idea’ and not surprisingly she was snapped up by Channel 5 to co-present their new high-tech weekly programme called ‘The Gadget Show’. They cover all the latest boys’ toys from surveillance and tracking equipment to the latest hand held PC’s, mobile phones, etc. This show is just about to start its seventh series with the eighth scheduled to start filming in November 2007.